Hello again and let’s welcome back Kimberly Steele. Though this is her first time to be on 13 Questions, this isn’t Kimberly’s first time to be on Horror Addicts. Kim said that, “I feel that my pathetic, obsessive lurking around Emerian’s fabulous site and community becomes slightly more legitimized because I’ve been asked to interview twice.” 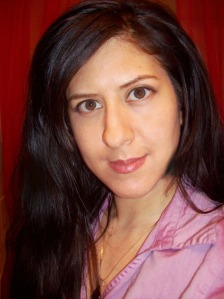 For Horror Addicts episode 28, Steele wrote a short story titled the Butterfly Collector. “I wrote Butterfly Collector in a weird, feverish, and angry haze over the period of two days. I am half-Japanese and adopted (raised by white people) and from time to time I have agonized over the acute otherness of being exoticized (sic); usually by accidental perpetrators. One facet of Butterfly Collector is my seemingly inexhaustible anger about the fetishization (sic) of women in general, utilizing the classic Asian woman “Madame Butterfly” stereotype for poignancy. Steve, the chauvinist vampire character, doesn’t see females as human. They’re beguiling, sexy, and silly, but in the end he views them in much the same way a natural carnivore views a juicy steak. When he falls in love with one of his victims, he’s forced to confront his suddenly authentic feelings for her–the butterfly is the Ancient Egyptian metaphor for the soul–and he finds himself delaying his urgent plans to rip out her throat and dump her in a ditch somewhere.”

Speaking about Horror Addicts, you may have heard the rumors going around that Emerian and Kimberly hate each other. After you read what Steele had to say about the rumors you’ll see what’s going on. “She’s my sister by a different mister, I love that chica. Emerian and I share Criss Angel. We get at each other, but it’s really Criss is to blame. He’s a slut.”

“[She] started writing during a terrible period of my life when [her] husband and [her] bought a house in the country and he remodeled it.” Kimberly said, “I’m not handy, so there I was sitting in an empty room with nothing to do. I began writing to avoid going crazy with depression. I wrote Forever Fifteen, my first novel, mostly by hand into a red 3-ring binder. It was Forever Fifteen that made me decide I wanted to write for the rest of my life. Even though the home remodel was a disaster that didn’t end well for us, I feel like it was kismet. I’m not sure if I ever would have started writing had it not been for the period of isolation in that awful house.”

You may have heard of Steele’s novel Forever Fifteen. Kim revealed to me that, “…the number one question I get every week is, “When are you going to finish the sequel to Forever Fifteen?” I do plan on finishing it–there is no intention to pull a Margaret Mitchell and not write a sequel–but I need a great groundswell of fans to demand that Forever Fifteen be brought to film. The fans of this book are so sweet. One fan, Ashley, actually asked me if there was anything she could do to help me write a sequel! Forever Fifteen has a wonderful filmmaker behind it right now, but it needs a producer. Once that is attained, I’ll write the sequels fast and furious, I promise. The primary issue is that right now there isn’t time to write the sequels because I’m consumed with owning a music teaching business. There isn’t enough movie interest to justify writing a sequel, but it’s building. I’m convinced that massive exposure of Forever Fifteen will be what it takes to get it to film. Word of mouth is integral–if you love that book, I implore you to spread the word to any friends you think would like FF. I think the fans will cause the tipping point with FF someday but it will only be because of the extreme power of word-of-mouth recommendations from sources like Horror Addicts.”

With that information, I just had to ask how the popularity of FF has affected her. “The popularity of Forever Fifteen never fails to astonish me. I wrote it six or seven years ago and I still get fanmail about it every week, all of which I save. It is Forever Fifteen that gave me the much-needed confidence that I was a “good” writer and could continue with other stories and eventually novels.”

Not only does Steele love writing but she also loves music; like many other Horror Addicts I’ve interviewed this season. She even has an alter-ego named Queenie. “Queenie used to be a name I used as a singer-songwriter. As I stopped performing live, I began to see Queenie as a ghost. She’s my doppelganger who was once a nineteenth century courtesan. She gave up her posh life as a courtesan for true love.”

“I love writing music and yet it is writing fiction that I love more, at least for now. The goal of both my music and

fiction is the same: to bring you into my twisted, morose, and occasionally disgusting version of reality. Fiction is an easier medium to work with than music because there are less steps. I write it and you consume it. All I have to do to distribute new fiction is to throw it up on a blog somewhere. Done. The trouble with music is is there are more steps. In music, there’s the composing, the lyric-writing, the practicing, the playing, the high-resolution multitrack recording, the mastering, and finally the music arrives to you in convenient MP3 form. If any one of those steps is not well and expertly executed, the music will suck. Writing is more talent-only. It’s either there or it’s not.”

A little story about Steele, that she shared with me after I asked about any embarassing moments she may have had. “I wear thong underwear. Not all the time, but I’ll wear one if the pants or skirt is formfitting because I’m of the generation that considers visible panty lines the epitome of personal tackiness. Before we bought a washing machine, I used to have to go to the laundromat every week. My black thong underwear fell on the front porch on the welcome mat of the house. I was teaching lessons out of the house at that time. The whole day, students and their parents tramped in and out of my house with my black thong underwear laying on the mat. If you were a student and/or parent who had to wade through my underwear that day, I apologize to you now. My husband found the underwear on the mat at the end of the evening and asked, “Are these yours?” It’s not the first time I’ve dropped my underwear out of the laundry basket in a public place. For some reason when I lose underwear, it makes its way to a public arena (which is quite often). Said underwear will eternally be a racy black lace thong, never the innocuous white bikini briefs.”

With everything that’s going on in her life, I wondered what it was like in a day in the life of Kim. And she gave me a little sneak-peek into her life. “I am a music teacher blessed with my own private Studio. Piano and guitar lessons are my full time job. My day is weird: I start and end late. I never wake before 10am if I can help it. I feed Kiki [her cat] the moment I get up if I don’t want to be assaulted.  I drink Earl Grey tea in the morning, no sugar. I’m not a breakfast fan so I usually skip it. I do email things before noon and try to write before I go to work. I make myself a big lunch around 1:00 and go to work around 2:00. My work is very pleasant: I spend my day bringing happiness to people and I am somewhat of a goofball when I teach. Nevertheless, it is hard work and I usually don’t get home until after 9.” 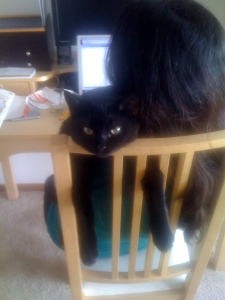 Being such an important part of Steele’s life, I just had to know more about Kiki. “[She] is a shelter kitty. She’s about a year and a half old–we got her at about three months. She was very skinny and sickly because she had an infected spay scar, so she had to wear an Elizabethan collar (seriously, that’s what the vet called it) for several weeks. You should have seen the joy when we finally took that thing off. I believe that Kiki enjoys being a spoiled momma’s girl–she gets a great deal of attention from me with my frustrated maternal instincts. When you are over thirty and you don’t have kids, your cat will end up in a sun dress.”

Kimberly has a blog titled “Two Black Haired Girls.” Which features information and pictures of herself and Kiki. “2BHG was just a weird and ridiculous blog I made on WordPress to post pictures of Kiki and chronicle the annoying beast that is my hair. I have giant hair. Other than that, Kiki is a natural model. She’s always striking new and bizarre poses when she isn’t napping on my shoulder. I post very infrequently. There’s only so much information about my oversized hair and Kiki’s vogueing one can take. The surreal thing about 2BHG is that people actually read it, usually 100 or more views per day, sometimes up to 300.”

“Beside Forever Fifteen it’s only short stories right now. I’m halfway through a new vampire novel called River’s Heart. It’s about a Native American girl named Ann who is turned into a vampire at age thirteen. How horrific would that be? was my exact thought. River’s Heart is just a little bit reaction to the cringeworthy depiction of Native Americans as werewolves in Twilight. Not wholly, but I’d be lying if I denied that I wasn’t retaliating to Stephenie Meyer’s superficiality in dealing with that chapter in American history. As for my alter-ego, Queenie, she’s got a fourteen song album coming out this month called the Dream of Flight.”

For more information on Kimberly Steele check out any of these many websites:

4 thoughts on “13 Questions with Kimberly Steele”