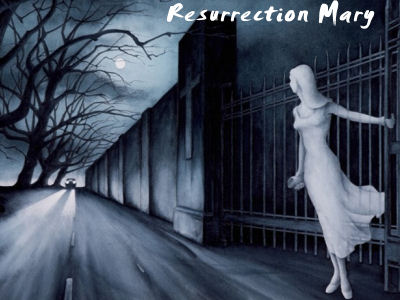 Since the last episode of horror addicts was on the 1930’s, I wanted to take the opportunity to talk about my favorite ghost story: Resurrection Mary.   The story of Resurrection Mary takes place near Chicago Illinois in a town called Justice. Mary is a ghost that haunts Archer Avenue between the Willowbrook Ballroom and the Resurrection cemetery.

Mary was first spotted in the 1930’s. People have described her as a young woman with blond hair, wearing  a white party dress with a shawl and carrying a purse. Men have reported picking her up hitchhiking near the Willowbrook ballroom, sometimes she asks to be taken to the cemetery. She  gets into the car and disappears before the driver reaches their destination. Many people have claimed to have seen Mary. Sometimes she just appears in front of cars driving down Archer Avenue and sometimes she appears in the passenger seat of a moving vehicle and slowly fades away.

Mary’s early appearances started when several motorists who drove past the Resurrection cemetery kept claiming that there was a young woman who kept trying to jump onto the running boards of their automobiles. The story changed after that, some people  say that they met Mary at the Willowbrook Ballroom which at that time was called the O’ Henry Ballroom. People said that they would dance with the girl and then she would then ask for a ride home. The directions she gave would lead to the cemetery, she did not speak when she got into the car and then mysteriously vanished when they got to the cemetery.

Many people have also claimed that they have seen Mary walking along Archer Avenue and when they ask her if she wants a ride she disappears. The strangest thing about Mary was that most people who saw her in the 30’s all described her as looking the same from her blond hair, blue eyes, and party dress to her shawl and the small purse that she carried. 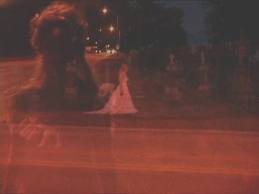 Other descriptions of Mary were much more terrifying than a vanishing ghost. Some drivers have said they were driving along when a young woman bolted out in front of their car and screamed. Then the driver heard a sickening thud followed by the woman being thrown through the air and striking the pavement. When the driver would go out to check on the girl, they found no trace of a body. The Justice police department has had several reports of people coming in and crying that they had struck and killed a woman but could not find the body.

No one knows for sure who Mary was in real life but the story that most people believe is that in the winter of 1930 there was a young woman dancing at the O’ Henry Ballroom with her boyfriend. At some point in the evening they got into a fight and Mary stormed out of the ballroom and started to walk home along Archer Drive. She was then struck by a hit and run driver and left to die in the road. She was buried by her grieving parents at the Resurrection Cemetery.

Most appearances of Mary happen in the winter and most of the sightings of her were in the 30’s and 40’s but reports of Mary have never stopped. Mary has become a legend and is considered to be Chicago’s most popular ghost.  There have been books written about her and even a movie was released about her a couple of years ago but it didn’t do Mary justice. The only way to really find out about Resurrection Mary is to take a drive along Archer avenue and maybe you will find Mary walking along the road  by herself, trying to get back to the cemetery.

Do you have any favorite ghost stories that you want to share with us,  leave a comment and let us know.