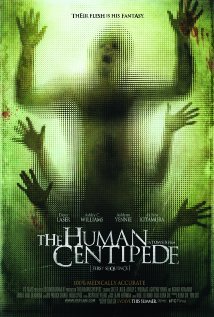 As films about fusing one person’s mouth to another person’s anus go, this is a pretty good one! The most shocking aspect of this film is that it is not particularly gory or graphic, and it is the better for it.

In the initial stages of watching The Human Centipede I was preparing myself for a huge disappointment. The two female leads were initially terribly grating and irritating. Being generous, let’s assume that they were well acted to be this way. However as the film progresses the characters develop from vacuous party girls to capable individuals (well one of them, anyway) and we find ourselves rooting for them and caring about their plight.

I don’t think it is giving too much away to divulge that The Human Centipede is a film about three people (two female friends and one unrelated man) who are abducted by a deeply disturbed scientist who aims to create a living “human centipede” by attaching each of the abductees to each other, mouth to anus, thus creating a completely linked digestive system. Given this synopsis, the audience would think that they are in for a gore-fest of gratuitous nastiness; but they are not.

Shortly after we are properly acquainted with the female leads, who are looking for assistance after their car breaks down, they arrive at the house of the antagonist. Here the casting director should be praised as Dieter Laser, who played the mad scientist Dr. Heiter, is every inch the archetype. He is a bizarre looking man, skeletal with an almost demonic face, and his portrayal of deranged evil was superb. Instantly we know that this man is dangerous and we acutely sense that the girls are under imminent threat.

The character of Heiter is more complex than perhaps is expected. In less subtle films he would be a charmer, luring people under a false sense of security and then bludgeoning them. Not so in A Human Centipede, he is cold and unlikable. Despite his objective to abduct the girls he cannot control angry psychotic outbursts – eventually he manages to drug them, describing the details of Rohypnol as he does so.

With the emphasis on the “centipede” itself in the promotion of this movie, it is a pleasant surprise to find a reasonable section of the films second act given over to a taut, well constructed “cat and mouse” sequence within Heiters extensive home. These scenes were thrillingly tense, and a sense of empathy for the hunted girl was well crafted. A nice touch was added where an ultimatum is given to give herself up or face greater suffering when she is inevitably caught. The viewer cannot help but wonder “what would I do?”

The director should be applauded for only giving the audience a couple of brief “cringe moments” during the construction sequence of The Human Centipede. The horror comes not from much that we witness during this scene, but from what we graphically know is happening. Previously, Dr Heiter had demonstrated via a presentation to his captives exactly what he was going to do to them – using scientific language and un-emotive line diagrams. Hence, when the procedure is undertaken little is seen but we know every unpleasant detail that is happening. 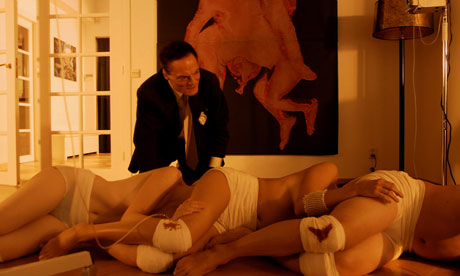 We get a greater insight into Dr Heiters madness as he uses general anaesthetic during the procedure – he is not a sadist, he is genuinely focused on creating what he perceives to be his masterpiece. When watching Heiter go about his work, it is hard not to think of animal vivisection, Nazi experiments and the Japanese Unit 731. This kind of thing goes on, and the people doing it consider themselves justified. This is the true horror that the film hints at.

It is truly chilling watching Dr Heiter training his creation once it is complete. A Japanese guy is “the front” and of course the only one of the tri-part centipede who can speak, yet only in Japanese. This creates a bizarre interaction between the doctor and his “creature”. The captive is of course filled with rage and hatred for his captor, but is utterly at his mercy. He soon learns.

Naturally, the scientist wants his creation to thrive and feeds it well from a bowl on the floor. The viewer is one step ahead at this point and, with the front part feeding, the film does address the inevitable result. As with the surgical scenes this is done briefly and with no gratuitous mess, however it does contain one of the most genuine apologies ever seen in film! The scene is disturbing not for the act occurring, but for Heiter cheering encouragement.

Eventually local police undertake a missing persons search and we are given a ray of hope for our beleaguered captives. I will not expand on whether this hope is in vain or not, but again the film has the viewer urging the victims on and builds tension in a capable manner. The final scene of the film was powerfully done, and invites us to put ourselves in the shoes of who we see on screen.

The Human Centipede is not a brilliant film, but it is a good one. Certainly it was vastly superior to the experience I was expecting and significantly less graphic. If you can handle the concept of what occurs, there is nothing in the film that will particularly trouble you. Given the central premise, this was never going to be classic cinema – but if you are intrigued enough to give it a go you are likely to find it a better film than you might imagine. Someone has clearly come up with a gruesome yet imaginative idea and built a film around it – surprisingly they didn’t do too bad a job.