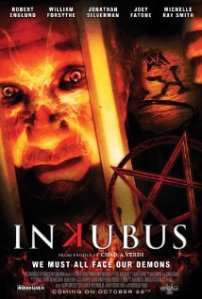 Robert Englund is a name that has become synonymous with horror since his days of playing Freddy Krueger in several Nightmare on Elm Street films.  As of late Englund has been found doing guest shots in films and movies but rarely has he had a full starring role. The film Inkubus puts Englund back into a starring role and front and center through much of the film.

Joining Robert Englund in Inkubus is another name that should be known to horror fans, one William Forsythe.  Along with these two actors the main cast is rounded out by Jonathan Silverman, Michelle Ray Smith and Joey Fatone.  There are two supporting cast members Horror Addicts should recognize and that being Dyan Kane and Tom DeNucci who were featured in an our previous season finale along with director Glenn Ciano.

The film Inkbus has a tag line that reads, “We all must face our demons.”  Those who take time to view the film should see that this is a very appropriate line.  Inkbus tells the viewer of the horrific events that take place, one seemingly quiet night, in a police station in the town of Wood Haven, Rhode Island.  The station is devoid of much activity, and personnel, as it approaches the date to shut down.

The precinct’s silent night is broken when a young man is arrested for supposedly killing his girlfriend.  The young man claims his innocence stating that out of nowhere someone was there attacking her and taking her head.  They do not believe him as his body is covered in her blood, but those doubts change soon enough.

The change comes as a man in a dark jacket walks in carrying the head of the young man’s girlfriend. The police quickly arrest the man and have the young man sent to lockup.  This is where things in this soon to close police station go from weird to downright deadly.

As the movie progresses the story is told about whom this man is, and we find out about his origins.  This is not a normal person but a long lived demon that has a plan for a retired police detective. The problem is everyone in the police station is in danger and with the simple tricks that Inkubus will pull on those inside can turn deadly.

Inkubus makes great use of the actual closed police station that they were able to use to shoot the film.  This added realism to the film that may not have been provided on a sound stage.  The film also gives you a sort of claustrophobic feel just as the actors started to feel while shooting the film.  It allows you to possibly understand how Inkubus is able to easily manipulate those around him.

The film also takes time to explain the back story of Inkubus and how long he has been around humans.  We begin to understand his motives and what he is doing in that particular police station.  We find out that we are actually reliving the tale at points as we find head Detective Caretti (Fatone) is being interviewed while in a psychiatric ward somewhere.  His story covers the events of the night we witness and what happened to his wife and child.

Inkubus can be called a bit of homage to Englund’s past role as Freddy.  The main difference in this case all those who fall victim to his mind games are well awake.  Englund’s character also has a unique device that is utilized in some of the kills that are witnessed in this film.

Inkbus may be questioned by viewers who check the cast list and wonder how such an odd cast of actors can turn in a good film.  This comes from the way Director Glenn Ciano is able to get the best out of his cast.  Many, I’m sure will question the use of former N’Sync singer Joey Fatone in such a pivotal role of the film.  This was something I also questioned, but I found that Fatone did a great job in the role of the chief Detective. The fact he was featured in many of the films scenes along with Englund and Forsythe only helped to make his role even more believable.

Inkubus is not a big major motion picture movie, but fans of Englund will certainly enjoy the film.  There are other reasons to like the film as the setting, the look, and feel of the film add to the overall enjoyment.  We at HorrorAddicts.net were lucky enough to speak to some involved in the film and from their discussion of the film you can easily get the feeling the loved the film they made and the experience in making it. This is something that viewers should take with them when watching the film and enjoying Inkubus.