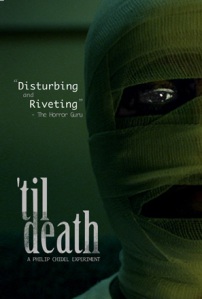 Til Death is a short film that was written and directed by Philip Chidel.  The film stars Ramon de Ocampo, Johnny Giacalone and Katherine Celio.  The story, although short, tells about the simple love between a man and his wife. You could also say it shows exactly what they mean by those wedding vows, “Til Death do us part.”

The film opens with a grieving husband visiting the grave site of his departed wife, Karen (Cello) who died in a car accident.  The husband was injured in the accident but fortunately for him he was not killed, or maybe it’s unfortunately for him.  His friend, Ron (Giacalone), is with him at his side and we get the sense he is the fix-it type of man for their mutual employer.

Mark (de Ocampo) is naturally distraught over his wife’s death and upon going home he sets himself into a stale home. The main lighting source comes from the windows or a fire place in the evening. He doesn’t appear to be motivated to get on with his life after Karen’s death. You could almost start to feel bad for the man, but as Ron tries to check on him you begin to wonder.

Eventually the hurt and pain from the loss of his wife takes a much deeper toll on the poor man. He begins to slowly seem to decompose and his body starts to fail him.  We get to watch as this happens and the look and feel as this happens is shown masterfully in this short film.

As this is a short film one must be careful on how much of the main plot is discussed. The film is something that people will truly enjoy as we watch how the main character copes with what happens. The eventual outcome is not something some will see coming and this adds to the  film. This is another great short film that will keep viewers glued to the action and maybe even get you to cringe.

Some additional information I’m sharing late but if you want to learn more about the film you can check out the two links below.

Web site:  www.tildeath-movie.com
Facebook Page: facebook.com/TilDeathMovie
Update from 5/13/2012
Philip Chidel and I, have been in touch and he asked I share this with those who wish to view the film.  This also goes for those with additional questions.  He asked that you get a hold of him at the following email. So if you want to view the film, drop him a line.
Email Address:  tildeath@cardiacpictures.com