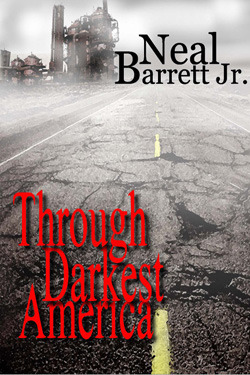 This book  may not fit the classic definition of horror but I think its one that the readers of this blog will enjoy. Its called Through Darkest America by Neal Barret Jr. Its set in a post apocalypse America several years after a nuclear war. The star of  the book is a 12 year old boy named Howie. Howie lives with his family on a farm. In this alternate reality there are no big cities anymore and there is no wildlife with the exception of birds which the holy scriptures call unclean and some strange hairy creatures called horses which are very different from the horses we know.

Howie believes that the government is always right, his dad is the wisest man around, his mother is the most beautiful woman in the world and his sister is a pest. Things change quickly though because a revolution is coming and Howie has to grow up and he quickly realizes that the world is very different place then he believed it was. Through Darkest America is a coming of age story set in a post apocalyptic world where everyone seems to have an agenda and no one can be trusted.

During the course of this book and within a short period of time you watch Howie go from a boy to a man, you see him survive a couple of horrible tragedies, fight in a couple of battles that he didn’t want to be a part of and watch him get tortured for information he doesn’t have. What makes this story great is you really feel for Howie, you feel for him as he asks his father to explain things he doesn’t understand and you are rooting for him as he tries to escape from a city during a war between the loyalists and the rebels. Through Darkest America was originally released in 1988 and  recently was rereleased through Biting Dog Press. I think this book deserves to be considered a classic.

I wasn’t sure I wanted to talk about this book here, because I kept thinking to myself that it wasn’t really a horror novel. but when I started to read it, right away there was a scene that made me realize that this book could be considered horror just as much as it would be considered speculative fiction. At one point Howie is told by his father to go see to the stock that they are taking to be slaughtered for meat. As the author is describing the stock you suddenly realize these aren’t pigs or cows. The stock is humans. So in Neal Barret Jr’s vision of a post apocalypse America, humans are keeping other humans as food, and to me that makes this book horror.

This book is very dark and there really isn’t a happy ending but at the same time it is a very well written fast paced adventure with a lot of suspense thrown in. I loved how Howie is forced, to soon to become a man and how little by little he sees that everything he believed as a child was wrong. you also see his quest to figure out what is right in this world and a new place to call home. I highly recommend this book. 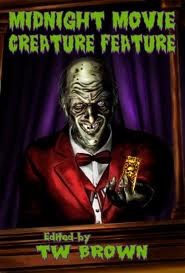 If your a hard core horror fan then you should be familiar with the books of May December publications. May December has put some great horror anthologies together that any fan of the genre can appreciate. A good example of this is an anthology called Midnight Creature Feature. In the introduction the editor, TW Brown dedicates this book  to anyone who  stayed up late to watch scary movies after their parents went to bed. This book manages to take you back to a time when you we’re a kid and you couldn’t wait for the monster to appear on screen in a horror movie.

Every story in this book has some kind of monster in it, including zombies, werewolves, golems, aliens, demons and swamp monsters. Some of the stories are funny, some are scary and some are a little bit of both. A couple of stories here could easily fit into the science fiction and action  genres as well, proving that there is a little bit of everything in this anthology.

One of my favorites in this book is The Lure by Chantal Boudreau. This one is a fishing tale where a man has a vendetta against a fish. The problem is the fish is 10 feet long with teeth the size of daggers and has powers that make it a very hard fish to catch. What makes this story great is the use of imagery and how it makes you feel sorry for the man trying to catch the fish even though he’s a monster himself.

I also loved the story The Pit by Terry Alexander. The monster in this story is a werewolf and its being hunted by a man who is hoping to get his kidnapped daughter back. I liked this one because it was an action story with a lot of gore thrown in. I also liked the two main characters and how their personalities we’re described in the story.

My two favorite stories we’re comedy with a little horror mixed in. The Spine Tingling Tale of the Crystal Golem by Tom Ribas is a funny story about a monster made of crystals reeking havoc on a small town. This story makes the point that its not easy being a soulless killing machine. My other favorite was Frightening Cliche’s by Bernie Newsome. This one follows a horror author and his wife as they try to escape from an army of swamp monsters. What makes this story fun is the interaction between husband and wife.

Another great thing about this book is before each story there is a movie poster and the art for all of them is excellent. I mainly loved this book because it reminded me of why I fell in love with the horror genre as a kid.  When I watched a horror movie I wanted to be shocked, scared and hopefully get a few  laughs. I also wanted to see a monster terrorizing its victims. Midnight Creature Feature delivers the scares and the laughs and is a book that every horror fan should read.