For this weeks Free Fiction Friday, we have two vampire books up for grabs. These books are two parts of a four part series and are written by  punk rock singer/Journalist/Author: Mick Farren.  These are the first two novels in the Victor Renquist series. Victor was born in the 12th century and now lives with a colony of  four other vampires.

The first book is The Time of Feasting and it originally came out in 1996. Tired of living in hiding and feeling contemptuous of humanity, the young vampires in Victor’s coven have challenged him for supremacy.  To make matters worse, a city cop and an ex-priest have uncovered the secrets of the coven, putting all vampires in danger.  Its up to Victor to squash the rebellion and stop the two humans before they inform others.

The second book of the series is Darklost and was published in 2000. Victor has moved his vampire colony  to 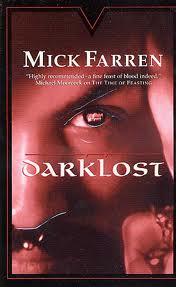 Los Angeles but not all is well. Victor has an uneasy feeling that someone is messing with dark magic that can destroy all of civilization. He finds out that there is a religious cult is trying to summon Cthulhu and bring an end to mankind. Humanity’s only hope rests with a small group of vampires that have to overcome their differences to save us all.

The reviews that I’ve read for The Time Of Feasting and Darklost all say that they are great vampire novels and some of the author’s best work. Not only is Mick Farren author of several horror, cyberpunk and sci fi novels he is also the lead singer of the punk rock group: The Deviants. If you want to get your hands on these two books all you have to do is leave a comment on this blog saying what your favorite vampire novel is and why. The best answer gets both books. I want these two books for myself so I’m going to make things a little harder then usual. Good Luck!!!