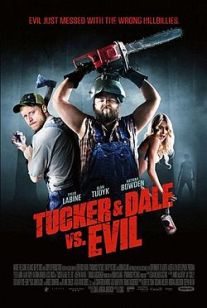 So often in horror movies those “hated” hillbillies are portrayed as deformed insane killers that will kill anyone that enters their property. They are often seen as cannibalistic creatures, more than humans that thrive on the meat of college students and travelers. The question raised in the comedic horror film, Tucker & Dale vs. Evil, is what if this is not the case.  Is it possible that sometimes these poor people are just misunderstood?

Tucker & Dale vs. Evil starts out with Tucker (Alan Tudyk) and Dale (Tyler Labine) are working their way to a vacation property that Tucker just purchased. They stop at a gas station and while there the inevitable happens. A car load of college students comes into the lot and Dale is smitten by one of the members of the college group.

The college students are on their way to go camping and consist of Allison (Katrina Bowden), Chad (Jesse Moss), Chloe (Chelan Simmons), Chuck (Travis Nelson), Jason (Brandon Jay McLaren), Naomi (Christie Laing), Todd (Alex Arsenault), Mitch (Adam Beauchesne) and Mike (Joseph Allan Sutherland).  It’s the very pretty Allison that Dale finds himself liking and after some pressure from Tucker he goes over to talk to her. The problem the man is nervous and isn’t exactly in his Sunday best. He freaks the group out. After all, they do say that first impressions are a key to making friends and in this meeting the kids think they met killer Hillbillies.

Tucker and Dale just let it go and continue out to their vacation home and arrive to find a rundown cabin. To them this is heaven, and although it may need work, they set out on making the place their second home.  It just happens that maybe a few miles away, along the same lake the college kids have setup their camp.  It’s here that Chad makes moves on Allison only to have her turn him down.

Chad shares the story of a Memorial Day Massacre that happened in these same woods years before. It was a case where some hillbillies had slaughtered a group of college kids with only one of them making it out of the slaughter alive.  As in most cases to take the edge off the kids decide to take a swim on the lake not knowing that Tucker and Dale are already fishing.  It’s only when Tucker and Dale see the beautiful Allison with her freaking out seeing them causing her to fall and hit her head.  The boys rush to her rescue pulling her into the little boat and as the other college kids’ look on their fear the worse.  The only thing this group of kids can do now is SAVE THEIR FRIEND.

At this point in the movie things just continue to get more confused and messed up on both sides of these comedic story. The kids mount a rescue missing as Dale does his best to nurse the injured Allison back to health.  As each side does their own things it’s bound to happen that they misinterpret the others actions. Things only get worse for the college kids as odd accidents end up in some shocking deaths that will not only have you laughing but shaking your head as you watch.

To think just a bad first impression and a misunderstanding will lead to all this carnage.  Tucker & Dale vs. Evil is a great story and movie. It is truly comedic to watch as the two very kind hillbillies must struggle against the menacing college kids. The kids may be more to blame for what is happening in this film than the hillbillies turning this genre specific norm around.  The movie will lead you not only laughing but for a change pulling for the hillbillies.