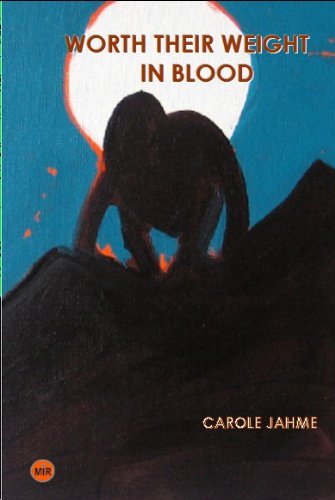 There are several different king of vampire novels out there. Some are meant to be scary, some lean towards the romantic side and some vampire stories can be considered urban fantasy. Just when I thought that I’ve read every kind of vampire book there is; one comes along that takes a different look at the genre, combining evolution and vampires.  I’m talking about Worth Their Weight In Blood by Carole Jahme.

Life hasn’t worked out as planned for Scarlett Fox, she went away to college and came back to the town of Radfield a single unemployed mother. She lives with her mother Red and daughter Ruby and feels like an outcast among the townspeople.   Her luck starts to change though when in the middle of the night the Zomnifiers Blood Research Institute moves into town looking for new employees. Scarlett applies and gets a job taking care of a chimpanzee with a rare blood disease.

Scarlett has an interest in evolutionary psychology and is ecstatic to have a job studying chimpanzees, but she slowly finds out that something isn’t right at the Zomnifier’s institute. They only work at night, the chimp is afraid of the scientists and there is a skull on display with large canine teeth. Everyone at Zomnifiers is a vampire and Scarlett is faced with the decision to become one of them or her and her family will die.

There is a lot more going on in Worth Their Weight in Blood then the storyline. The book gets deep into evolutionary psychology and also gets into philosophy.  My favorite part of the book was when Scarlett debated with the vampires weather they had souls or not. The vampires believe that they are better then the humans because they live longer and they do not have egos. Scarlett says that because the vampires can’t self reflect they can’t relate to anyone. They can’t feel true compassion and because of it they have no soul. This part of the story is well told and the suspense builds as the vampires grow more agitated at Scarlett’s claim.

Whether you like  Worth Their Weight In Blood or not depends on what your looking for in a story.  I liked all of the characters in the book. I enjoyed the relationship between Scarlett and her mother and hearing how Scarlett feels about the townspeople. She doesn’t fit in and longs for change and to be better then she is, but when change comes she finds that she looses more then she bargained for.

I did think the story moved a little slow but because I liked the characters enough, it didn’t bother me. What the story lacks in action it makes up for in great dialogue between everyone in the story. Also there are some horrifying scenes such as when Roman attacks someone on the highway and when Scarlett and Helios play “trouble with vampires” on a troublesome neighbor. The book also has a very steamy sex scene and a great battle in the end.

I also loved the two rouge vampires, Helios and Roman. Roman is a mystery and Helios is funny and manipulative.  Despite the fact that they were not major characters in the book, I thought they were very interesting and would like to have learned more about them.  Worth Their Weight In Blood is a very original character driven vampire novel and I’m hoping for more installments in the future.

One thought on “Worth Their Weight In Blood”