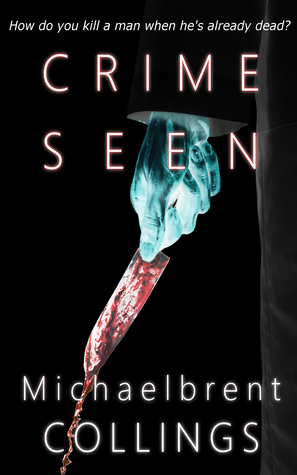 Detective Evan White is hunting a killer but not just any killer. The man he is tracking  killed his wife and he’s taunting Evan via the phone. Evan wasn’t supposed to get involved in the investigation but he couldn’t stay away. The killer is looking to kill everyone Evan loves and because the killer is already dead, he may be unstoppable. With the help of his partner Angela, Evan will have to stop the murderer before he kills again.

The best words to describe Crime Seen by Michaelbrent Collings would be, interesting. This novel was an original idea and I can’t think of another book like it. Reading it does have its drawbacks though. While it is an excellent novel you have to read it all the way through to fully understand everything that’s going on. When I first started it I felt like I was reading a book that started 1/3 of the way through but the beginning makes sense when you get to the end.

There was one point where I thought I was going to stop reading it because there were things going on that I didn’t understand but I stayed with it because I liked the characters so much and all of my questions were eventually answered. My favorite character was Angela Listings. She is described as small and beautiful in the book, but looks are deceiving. Listings is a tough cop but has a soft side and a great backstory.  My favorite scene with her was when two of the characters are talking about how to stop the bizarre killings and what they think is going on. Listings hears this and says she is  leaving to be among the sane. I like how she tries to simplify everything to keep from being scared when she doesn’t understand. If she still doesn’t understand, she lets her gun and fists do the talking.

I also loved the character of Tuyen,  she is another tough female character but she is different from Listings. Tuyen is Vietnamese, and has a rough life. She works in a voodoo shop along with a second job and she believes in a lot of old superstitions that were passed down from her grandma. She is also psychic and I liked how she helped Evan find the answers he needed to stop the killings, even though she found out that her beliefs wouldn’t save her from the killer.

Crime Seen is a paranormal mystery like you’ve never read before. I loved the concept in this story of finding the truth to end what’s going on. I also liked how Michaelbrent Collings doesn’t explain everything until the end.   Without giving anything  away, Evan’s reaction to seeing Angela at the end was the best part of the book. Even though he knows whats going on, he’s still happy because of the people around him. If that doesn’t make sense, read the book and it will. Crime Seen is a masterpiece, it may seem like it has holes but I think Michaelbrent was just making sure you got to the end before he made you understand his vision. I got to the end and now I’m looking for more books from Mr. Collings.