Along with Christopher Lee, this unassuming and charming little man stood tall for Hammer Films and took on many memorable characters even before he blessed us as Grand Moff Tarkin in Star Wars. Bow!

The Curse of Frankenstein (1957) – Director Terence Fisher (Sword of Sherwood Forest, not to mention 4 Frankenstein sequels) puts the Hammer spin on this Mary Shelley classic with more frame and focus on Peter Cushing’s mad scientist Baron Victor von Frankenstein than his monster creation Christopher Lee.  Robert Urquhart (Knights of the Round Table) is delightful as the tragic voice of reason, and Hazel Court (The Masque of the Red Death) adds the proper feminine screams, too.  Although the colorful Victorian style is typical and the old time science is downright phooey, the creepy tone, kinky undercurrent, and sinister plots build wonderfully. Even knowing how this tale plays out, there are still plenty of scares, suspense, and unethical monstrosities to be had here. 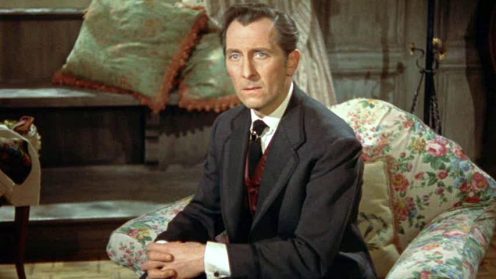 The Revenge of Frankenstein – Finally, finally I’ve got my hands on this 1958 Hammer sequel!  Now called ‘Victor Stein of the Switzerland branch’, Peter Cushing (I see your lack of Sir Christopher and raise you a Grand Moff Tarkin!) is once again delightfully ruthless in his delivery and actions- and looking fine while at it, too. A 19th century doctor with ladies packing into his waiting room, hmm… He seems so reformed to start, helping the poor and suffering patients- but we should know better! Cushing’s wicked suave villainy trumps all the inconsistencies in this series.  Despite director Terence Fisher’s (helmer of all except Evil of Frankenstein) best efforts, at this point, I don’t even think it matters what order you watch Hammer’s Frankenstein films. Fortunately, the stylized gore and expected Victorian flavor make up for any errors- even if the tone is more English than Continental.  The laboratory is sweet, and the bodily transformation for the hunchbacked Karl (Oscar Quintak and Michael Gwynn) tells a lovely story. Frankenstein’s just misguided, isn’t he? This new body is a good thing, right? Unfortunately, the extremes for science are just too murderous for the brain to handle, and the scares, shocks, and freaky deformities are perfection.

The Hound of Baskervilles – A solid and demented colonial prologue opens this 1959 Sherlock Holmes treat in the expected Hammer Horror style, and oft director Terrence Fisher keeps the suspense and thrilling moments going. Our dynamite duo has some sweet indoor and outdoor photography and lush Victorian looks to play with, too.  Peter Cushing is speedy and witty as Holmes, with an extra suave pose and flair to his actions, and boy Christopher Lee looks so young and smashing!  He fits perfectly as the snotty heir presumptive and should have been a traditional romantic lead far more often. Andre Morell (Ben-Hur) is also quite the fun, capable sidekick as Watson, and likewise Francis de Wolff (Scrooge) as Mortimer keeps the plot chewed and juicy. This is a fast-paced hour and a half with a smartly timed and unraveling puzzle. I definitely wish Hammer would have continued a Sherlock series as planned. If the Doyle arena weren’t so crowded today, I’d love nuHammer to try its hand. I suppose each generation wants to put its stamp on the detective, and perhaps not all fans of the newfangled Holmes approaches will enjoy the dry wit, British humor (should I say humour?) or possibly stuffy style here. Cinematic tricks, visual cues, and action twists are added to the tale, sure. However, all the traditional magic here exceeds an old-fashioned audience’s expectations.  Longtime fans of the cast, Holmes, and Hammer designs will certainly delight.

The Brides of Dracula – Peter Cushing returns- without the titular Big D- for this 1960 Hammer sequel directed by Terence Fisher (also of the precursor Horror of Dracula).  Here the once again young, suave, taking names and staking dames Van Helsing puts the cross to Yvonne Monlaur (Circus of Horrors), Martita Hunt (Great Expectations, Anastasia) and Andree Melly (The Belles of St. Trinian’s).  Though the Hammer sets are a little familiar, naturally; the scary sound effects, Goth Victorian dressings, lots of candles, and plenty of red velvet work toward a great, old fashioned, classy atmosphere. This chick spin on Bram Stoker’s plotting is unique, juicy, and dangerous-all these sexy women with secrets, screams, and fangy hysteria!  This probably wasn’t the first of the Hammer Dracula series that I saw growing up, but it’s the one that sticks in my mind best- mostly because of a sweet climatic finale.  Granted the inconsistencies are iffy, but that windmill of danger, doom, and retribution is classic awesome.

The Evil of Frankenstein – Baron Frankenstein is back!  Once again solo, Cushing handles this 1964 third film in the mad scientist focused Hammer set with gravitas and complexity.   Not so innocent assistant Sandor Eles (Countess Dracula), Kiwi Kingston (Hysteria) as the more traditionally styled monster, and creepy hypnotist Peter Woodworthpe (Inspector Morse) do drag a few scenes down.  However, there’s great spooky and demented music, delicate Victorian accents, cobwebbed castles, and all kinds of cool evil laboratory Rube Goldbergs to keep things pretty and entertaining.  Yes, longtime horror studies may notice the flashbacks and continuity here doesn’t always make sense.  Big whoop.  Other than a few inconsistencies and some screen or matte work, there’s actually very little to woefully date this movie- unlike modern effects laden films that rush for the now and get passé within five years.  Director Freddie Francis (Dr. Terror’s House of Horrors) keeps things in the ‘made to look old’ classy vein, with plenty of tragedy, smarts, and some fun horror hysterics, too.  Frankenstein uses an oil lamp as a weapon, beat that!

Frankenstein Created Woman – Pimp Cushing returns to his titular villainy for this 1967 sequel of sorts co-starring Susan Denberg (recognizable from the original Star Trek’s ‘”Mudd’s Women”) as his conflicted but deadly creation. The resurrection of the slightly more tender Baron thanks to his henchman Thorley Walters (The Adventures of Sherlock Holmes’ Smarter Brother) and Robert Morris (Quartermass and the Pit) is almost mythical, as is the suggestion of his work delving towards black magic or sorcery in the quest for higher understanding.  The philosophical concepts, cruelty, legal injustice, and soulful debates add dimension and horror depths. What happens to love, innocence, and inner beauty when a tormented soul is given a pretty new body? The Victorian stock and demented laboratory look great in establishing the radical and unethical experimentations, too.  In addition to great guillotine suggestions and smart uses of red wine symbolism and color, there’s some sweet murder and suspense brought forth by the almost ghostly crossover vengeance.  While some may find the plot too abstract or even goofy, the big scary questions that come with science going to far work beautifully with the period creepy. Scientific reincarnation, horror, spirituality- all in one Hammer delight!

Frankenstein Must be Destroyed – Okay, there are more series inconsistencies that might hamper this 1969 outing for some; in many ways, it seems like the Hammer Frankenstein films were themselves released out of order, go figure.  The derelict laboratory scares, lady screams, and medical thrills here are darker, more sinister, and brutal compared to the previous installment indeed.  Cush is totally freaky this go round- nasty from beginning to end with an acerbic delivery and vehement action both for and against coerced accomplices Simon Ward (Young Winston) and Veronica Carlson (also of Dracula Has Risen from the Grave). How could such a charming little old man play such a saucy bastard? Shudder.  The visual mix of finery, top hats, and spats clashing with dirty acts and bloody surgery send the period fine furnishings and Victorian protocol on its ear.  Returning director Terrence Fisher (must I?) keeps things very intense, well paced, and properly played for a complete science horror ride.  Cocaine use, ethics of medicine, lunacy- with all this juice, it’s easy to say to hell with film continuity!

The Vampire Lovers –Ingrid Pitt and Peter Cushing star in Hammer’s kinky 1970 adaptation of Carmilla, and this one all but has it all!  It doesn’t look dated one bit, is still very well paced, and keeps up the entertainment through out.  Very nice fog and castle moods, early 19th century frocks and wispy nightgowns, sparkling candelabras and jewelry- it all sets the tone for plenty of blood, fangs, bites, and lots and lots of boobs.  The askew, black and white dreamlike photography and scary outdoor locations set off the definite lesbian juiciness, but fans of girl on girl vampire action and those of straight horror can both enjoy alike. The virginal Madeline Smith (Live and Let Die) ups the vampire prey, Kate O’Mara (Dynasty) is also darkly enchanting, and Pippa Steele (of the follow up Lust for a Vampire) is a real screamer!  Okay, the opening narration is a bit much and the music is kind of loud but really, no quibbles here. Now if only the two sequels were readily available stateside! 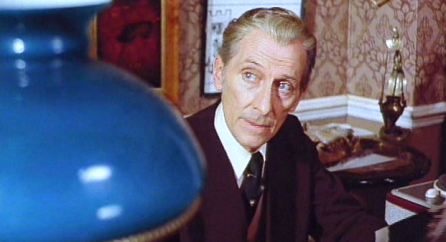 Twins of Evil – Another horror gem that goes by a dozen different titles and is tragically near impossible to find! Lovely playmates Mary and Madeleine Collinson join a zealous witch finder Cushing in this 1971 pseudo sequel prequel to The Vampire Lovers.  Even if the ladies may seem young or look a little too seventies ingénue to start, they are simply dynamite in their matching frocks and do fit the colonial style. Without subtitles, the accents and dubbing might be iffy for some, but so what.  It might also be tough to tell the girls apart initially, but bad girl Frieda makes herself known against good twin Maria, and the audience is treated to mistaken identity suspense, decent effects, and some sensual scares.  And oh, how Big Pete rocks that puritan look! He’s scary strict yet charismatic in his persecutions and latently kinky in beating and burning pretty girls. Cushing raises the evil fears and witchy terrors amid the vampness along with the slick Damien Thomas (Jane Eyre) as Count Karnstein. Who’s more the villain, the count who makes no secret of his bloodthirsty practices or the ringleader who burns the innocent?  Though juicy, some of the plotting here doesn’t make sense if you think too hard, for writer Tudor Gates (also Lust of the Vampire) may stray too far from the film’s predecessors and the Carmilla novel. Nevertheless, there’s great blood, boobs, black candles, and rituals to enjoy, along with a fun Katya Wyeth (A Clockwork Orange) appearing for Mircalla’s rising and seduction scenes.  Stroke that candle girl!

Horror Express – The DVD transfer on this 1973 Peter Cushing and co. fright fest is damn bad, ripe with too dark to see images, background noise, and ridiculously soft dialogue and dubbing. The turn of the century Asia locale looks cheap, the archaeology and science of the time stinks, and the editing is poor in my cut up 85 minute print.  Nevertheless, Christopher Lee is young, juicy, and rockin’ the porn mustache! This cargo gone wrong tale with a splash of religion and aliens has a fun train bound cast of characters, all of them with something to hide. Sure, the effects are a little hokey, but the less is more mystery does well- and the scary red eyes work. There’s rapid isolation for the evil monsters to run amok, kinky implications, betrayal, tension among passengers, and ambiguity among our boys. Lee and Cushing- both good guys working together for a change!  Add an unexpected and fun appearance by Telly Savalas (Kojak), humor and great quips, even some genuinely scary and jumpy moments along with the contained paranoia and you’ve got a damn fine little horror movie. This one definitely deserves to be cleaned up- hopefully the recent blu-ray does some justice.  As much as I’m against modern remakes- and Lee would have to make a cameo appearance in any update- in the right hands, this contained, fearful formula could work anew.