The Green-Eyed Monster by Mike Robinson

A Review by Angela Estes 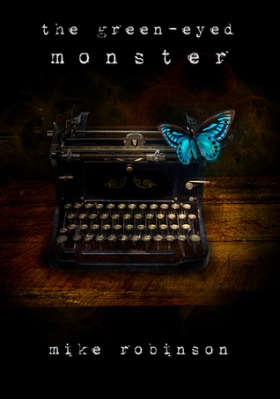 It was one of those days where I wanted to read an entire book in one sitting.  Luckily for me, I chose The Green-Eyed Monster by Mike Robinson.  The best horror stories leave the reader lost in a miasma of wonderment.  Securely safe in our awareness we have but read a work of fiction, our mind keeps retracing and testing the plot’s connection points for weaknesses.  The best horror authors craft characters and worlds who pop back into our minds while at the grocery store or surfing online.  The best fiction never truly leaves us.  The Green-Eyed Monster Robinson, while not quite achieving that stature of greatness yet, shows enormous potential to get there in his future works.

The story takes place in a fictional Northern California town called Twilight Falls where a respected and celebrated author has just been found dead.  Another author, who is the dead man’s greatest rival, is the main suspect.  If you’re expecting 200 pages of crime and mystery, however, you would be mistaken.  What you get instead is a novel that left me shaking my head at the end, amazed at the size and scope of the story, Robinson attempted to tell.

It isn’t what I would call “an easy read.”  The story of the two authors is told largely by other characters.  It is as if someone wrote a biography of Stephen King, but only included impressions of him from people who spoke to him once to ask for the time.  Or it would be if the tale then proceeded to show how a sole meeting with King changed that individual’s life forever.  Even then it would have to address why we exist and what is the purpose of life itself to be on par.  It’s a lot for a writer and his readers to wrap their minds around.

In The Green-Eyed Monster, Robinson has given us an entirely new world and mythos to consider and I am looking forward to see what he does with it in the sequel, Negative Space.

To find out more about Angela Estes: https://plus.google.com/+AngelaEstesangiece/posts

One thought on “Review: The Green-Eyed Monster by Mike Robinson”