My dark children, I am so sorry to say goodnight to you this weekend for 2014, but I am excited to introduce you to our Season Finale Guests! 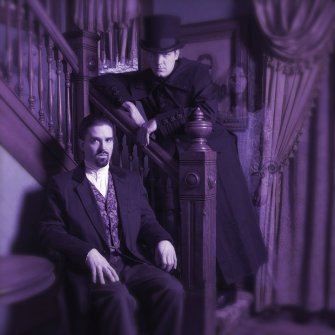 For almost two decades, composers Edward Douglas and Gavin Goszka have been known as Midnight Syndicate, creating symphonic soundtracks to imaginary films that facilitate a transcendental and adventurous escape into the secret dimensions of the mind’s eye. To many of their fans, they are Gothic music pioneers brewing a signature blend of orchestral horror music and movie-style sound effects. To others, they remain the first “haunted house band” that forever changed the Halloween music genre and became a staple of the October holiday season. And some know them as the duo that created the first official soundtrack to the legendary Dungeons & Dragons roleplaying game. Their critically-acclaimed works are reminiscent of sweeping, complex masterpieces by artists such as James Horner, Danny Elfman, Black Sabbath and King Diamond and have been featured as a part of groundbreaking films, television shows, video games and at haunted attractions, amusement parks and live performances worldwide.

Emily Goodwin is the international best-selling author of the stand-alone novel STAY, The Guardian Legacies Series: UNBOUND, REAPER, MOONLIGHT (releasing 2014), The Beyond the Sea Series: BEYOND THE SEA, RED SKIES AT NIGHT (releasing 2015) and the award winning Contagium Series: CONTAGIOUS, DEATHLY CONTAGIOUS, CONTAGIOUS CHAOS, THE TRUTH IS CONTAGIOUS (Permuted Press)

“I wasn’t afraid of death. If I died, it would be over. My worst fear wasn’t of dying, it was of living. Living while everyone around me had their flesh savagely torn from their bodies to be shoved into the festering and ever-hungry mouths of zombies. It terrified me, right down to my very core, to be alive while the rest of the world was dead.”

The award winning Contagium Series is a four book saga, published by Permuted Press, that follows Orissa Penwell on her journey through a post-apocalyptic world killing the dead, saving the living, and deciding if love is worth the risk. 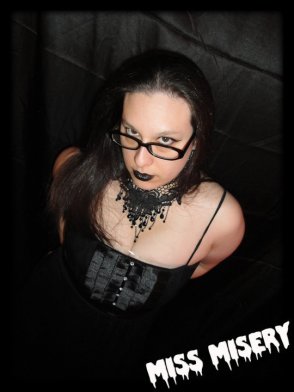 Press has dubbed Horror Hostess Miss Misery as the Queen of horror in the bay area. She is hostess of The Last Doorway Show, a show dedicated to promoting the independent horror artist. She also hosts those late night bad horror films on Movie Massacre; which will be coming to your television set very soon.  So get ready for a two hour delight of terror!

She also has a segment on Creepy Kofy Movie Time called Web of Insanity. Where she hosts 3 minute and under short horror films! You can even catch her at the end of the show dancing with Balrok, No name, and the hot Cave girls.

If you think that wasn’t enough Miss Misery will soon be coming out with her own line of comic books which she hosts tales of death of revenge called “Forgotten Tales” not only does she host these awesome stories but she also writes them. Get inside her head with these up coming comic books from Comic Book Divas.

Sometimes you can catch her having Bloody Mary’s with her gal pal Ms. Vampy!!

We will be revealing the winner of Best in Blood for last season, season 8. This is a good one, you won’t want to miss!

Don’t miss the ghouls, the goblins, and the gals as we ring in the Halloween season with the best special yet! Costume talk, Halloween jokes, and your favorite drinking word, all packed in to a show you won’t forget!