Gender Role Reversal in Happiness and Other Diseases

Happiness and Other Diseases is a dark fantasy set in contemporary times but rooted in Greco-Roman mythology. These are not the gods who sit upon high in Olympus; these are darker creatures that reside in the Demos Oneiroi, the world of dreams. It is conveniently located in Hades, at the point where dead souls arrive. It is no accident, when everyone knows that Somnus and Thanatos, the deities of Sleep and Death, respectively, are very closely related. They’re twin brothers.

While Happiness and Other Diseases is strictly speaking, neither horror nor romance, it has elements of both running concurrently through it, in the same way that James O’Barr’s The Crow and the movie franchise it spawned, and Mark Helprin’s Winter’s Tale do. As such, it can also be considered a dark romance.

I didn’t set out to write a novel. I set out to write an essay about role reversal with regards to the archetypal role of Damsel in Distress.  I studied some modern examples of this kind of role reversal in movies, television shows, comic books, and video games. I remarked upon how modern portrayals of women in these situations often produce a feminist outcry because such characters are frequently helpless, one-dimensional, and complicit in their personal victimization. 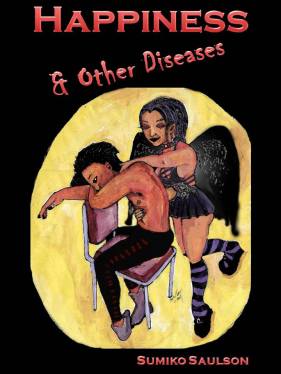 Of course I always preferred Apuleius’ tale of Psyche and Cupid. Psyche was similarly offered, but in marriage to a winged terrible monster. The monster turned out not to be so terrible, and they fell in love. In either case these women were guilty of no crime except for being beautiful and having braggarts for parents who angered the gods by crowing about aforementioned beauty.

These sexually charged images of virtuous women, bound and helpless, awaiting a punishment of ravishment and torture are politically contentious these days. They can be pandered to and condemned in the same breath, as in Zack Snyder and Steve Shibuya’s movie Sucker Punch. They can be couched in romance, as they are with the mousy, meek, and regularly rescued Bella in Stephenie Meyer’s Twilight series.  They can also be recognized as the grist for the sexual dominance fantasies they are, the way the Marquis de Sade did in Justine.

In modern times, the later seems ironically, the least controversial. There are far fewer feminists up in arms about E.L. James’ 50 Shades of Grey or Anne Rice’s Sleeping Beauty trilogy than about Twilight. Perhaps it is because in the later, these are clearly sexual fantasies. Perhaps we’re just less concerned about what grown women consume than we are about impressionable girls.

Of course, the essay wasn’t about them. It was about men. Men are frequently seen bound, naked, and awaiting torture in movies. In fact, there is even a television trope named for it, the Shirtless Captive trope. These generally hunky, well developed men are chained in prison cells or otherwise strapped down and tortured in everything from Braveheart to Wolverine.

Happiness and Other Diseases is not about those kinds of muscle bound heroes. Although it does have a strong female character, as so many stories do nowadays, she is not the central protagonist. Flynn Keahi is the main point of view character in the story, the Alice who goes down the nightmare rabbit hole.

Like Andromeda and Psyche before him, Flynn has unfortunately attracted the dangerous attentions of the Greco-Roman gods. He is being punished, not for being too beautiful, but for being masochistic, and passive. These sadistic little nightmare deities find that very attractive, and a particularly nasty one named Mercy has attached itself to him. She finds his nature so amusing that instead of killing him outright, she spends a year feeding off of him.

That is how he finds himself in this Damsel in Distress role.

Like any good Damsel in Distress, he is quickly placed into a life or death situation. Mercy and the rest of Somnus’ grandchildren, the somnali, are just supposed to give humans dreams or nightmares. They are not supposed to do actual bodily harm to them or kill them! They are out of control, and need to be stopped. Somnus’ mother, Nyx, swears that if Mercy kills off that young man she’s been playing with, their entire line will be punished. She’ll turn the lot of them into mortals!

This kind of plot device is typical for Damsel in Distress stories, especially ones in Greco-Roman mythology. Flynn is not a princess. He’s a lovable loser, a guy with mental health problems, economic and housing woes, who tries really hard to have a normal life but never can seem to get on his feet. It is his everyman charm that makes him a heartbreakingly tragic character. Life has been unfair to Flynn since before he ever got dragged into this mess. I knew that if people reading the story didn’t fall in love with this character, they weren’t going to fall in love with the story. I needed people to root for him, so I became very invested in making him a multifaceted, layered character.

In David Watson’s review, he said that he got to a point where he felt like he was just going to just lose it if the lovebirds in this story did not get to have a happy ending.  When I read that, I had two thoughts. First I thought, “Great!” I did it!” I thought the same thing when two of the other beta readers told me that certain parts of the story made them cry. Because that’s what I set out to do, use three strategically placed characters to break your heart. That’s not easy to do. In fact, it’s emotionally draining.

I did not intend to write a romance, but it is an issue for romance novelists, and authors in other genres who heavily feature a romance. If your lovers don’t get a happy ending, or the two people they feel should be together don’t end up together, people want to show up on the author’s doorstep with torches and pitchforks.

David asked me to write about how or why this story was better than other romances. I said, “Probably, because I didn’t set out to write a romance.” If I had been writing a romance, Flynn would not spend the entire story with the metaphorical Sword of Damocles over his head. This story is about the differences between tragedy on a personal scale and tragedy on a global scale. We might on an idealistic level, say that we care about the problems of the world, the hungry, the poor, and war overseas.

The truth is that it is only human to be clouded by our love for our closer associations. And that’s what this story is about.

Flynn starts out as someone who is alone, abandoned by his friends and loved ones because of his mental illness. When he gets into trouble, Somnus sends his half-human granddaughter Charlotte aka Happiness down to rescue him. The fate of humanity and the somnali rest on Flynn’s fragile shoulders, but his shoulders rest on Charlotte. She’s his knight in tarnished armor.

I think that people who understand the subtext of this story will understand why I’ve taken the time out to develop its secondary characters. In your typical, or formulaic, horror story as well as in your formulaic Damsel in Distress story, the pure, innocent, virginal female is the sole survivor. Everyone else become a one-dimensional adjunct to the need to maintain her purity.

In Happiness and Other Diseases, these other characters are very important. While Charlotte is constantly trying to rescue and redeem Flynn, Flynn is constantly running a silent calculation in his mind about the cost of his life. We need to know who they are because we need to understand something about him: Flynn is a very humble guy. He doesn’t think that he is more important than his friends. Love is what makes him important. Charlotte’s love for him, and the way love always makes us biased towards those we love.

The people who wanted to edit out the secondary character development are probably more like Charlotte, too. “What? Why are you developing these characters? I don’t want to think about homelessness? What’s this shit, let’s go back to the good stuff.  You know, like Charlotte molesting Flynn in the back of the nightclub. Fuck this noise!”

Which would be more like formulaic erotica or romance. Supplementary sex, added romance, less psychological development, and not as much giving a shit about how many side characters die horribly as long as the hero and heroine live happily ever after.

Flynn is very submissive, but he’s also idealistic. He wants to be the hero. He reads comic books and plays video games. If he can’t play the hero by shooting guns and wielding swords, then he’s going to try to play the hero by throwing himself on a landmine to save his comrades. He’s a man, a very thoughtful and gentle one. He wants everyone to know it and understand what being a man means to him He may be in distress, but he is no damsel.

So I think that if you deconstruct Happiness and Other Diseases you will see that it is very often about gender roles. It is about how a man like Flynn, being unstable, troubled mentally and having difficulty maintaining a job or a house, will be told he is unlovable. It is about how a woman like Charlotte, ambitious and self-assured, can be told that she is cold and unfeeling and cannot love.

It is about fate, and the ultimate horror story mortality that all of us humans are faced with on a daily basis. Life is short, and you can die in an accident, of some horrible disease, at the hands of supernatural parasites… you can even die happy.  But we all do die, don’t we?

If you have terrible nightmares, and petty, vindictive ancient deities haggle over your life, then maybe it’s not the nature of your death that is of concern, but the quality of your life.  Because we don’t all truly live, do we?

That alone is enough to make a strong woman archetype cry.

Sumiko Saulson is a dark speculative fiction writer.  She writes horror, dark fantasy, and dystopic or apocalyptic science fiction. Her works include Solitude, Warmth, The Moon Cried Blood series, Things That Go Bump In My Head, and Happiness and Other Diseases. The child of African American and Russian-Jewish American parents, she grew up in California and Hawaii. Her works are frequently set in these places and generally feature culturally diverse characters. She has spent most of her adult life living in the San Francisco Bay Area and currently lives in Oakland. “Things That Go Bump In My Head” blog http://www.sumikosaulson.com Happiness and Other Diseases http://www.HappinessAndOtherDiseases.com