An Encounter In the Dark

For a little over twenty years, I have been the caretaker of, and lived by two historic cemeteries that exist on the side of a mountain in the Arkansas Ozarks. East Mountain, as it was once called, is the local at which some of the first pioneers arriving at what is now the City of Fayetteville decided to settle. It is also a place where the local history and tales of the supernatural co-mingle to create a rustic atmosphere in which both are equally believable—and sometimes felt.

The larger of the two cemeteries contains the remains of hundreds of soldiers who fought for the Confederacy during the War Between the States. Most of those buried here struggled against Union forces at nearby battlefields that are today commemerated  at Prairie Grove State Park, a bit to the west of here, and Pea Ridge National Military Park, twenty or thirty miles to the north. The Battle of Fayetteville took place in April, 1862, when Confederate forces under the command of Brigadier General W.L. Cabell launched a surprise attack upon the occupying Union army. That struggle took place only a few blocks from where I live and the Confederate attackers set up their artilary literally a stone’s throw from where I am typing this story.

Those who died upon the nearby fields of war were at first buried on the battlefields; it was not until the year 1873 that their bodies were exumed and delivered here to East Mountain for a final resting place. I often wonder, given those circumstances, if any of their traumatized spirits still linger in the vicinity of their remains.

A distance back into the woods that border the east side of my driveway lies a deep ravine known as Ghost Hallow. Although the hallow is situated close to the center of town, it remains a remote and very isolated piece of land. In the year 1852 a newlywed couple from Fort Smith moved into a log cabin owned by the son of a distinguished Revolutionary War veteran. At the time, the log cabin stood  approximately a quarter-mile up the road from where I currently live. It was situated very close to the above-mentioned ravine.

One winter night the young lady got too close to the fireplace, catching her dress on fire. In a panic, she ran outside toward the ravine screaming. She didn’t survive her ordeal; and due to that winter’s bitter cold, it was necessary to store her body above ground until the arrival of spring’s warmer temperatures. It is said that those venturing close to Ghost Hallow at night can hear her screaming through the darkness. Although I live very close to where she burned to death, I cannot honestly say that I’ve ever heard her screams. Still, I have spoken to those who swear that they have.

Friends who used to live at the base of this mountain and considerably closer to where the Battle of Fayetteville occurred, once told me of a young girl they would occasionally see roaming around their back yard upon their approach home. Yet, she would always vanish by the time they pulled into the driveway. One day, information imparted at an historical event forced me to seriously consider the possibility that the disappearing young lady might have been killed during the Battle of Fayetteville, but that’s a story best left for another time. I would however, like to relate a story about my own personal encounter with the unusual—and the event took place only steps away from my front door!

My encounter with the paranormal (or so I believe) took place on an August night during the 90s. That evening, I sat with my guitar, as I often did, on the stone wall that encloses the Confederate Cemetery. Opposite me, a security light, which thankfully no longer functions, cast its light into the cemetery and upon a nearby monument once erected in memory of a soldier named James Davis, who had also been a Mason. The monument cast a long shadow, dividing some of the nearer, more illuminated grave markers apart by its veil of darkness.

For a while, I remained almost oblivious to my surroundings as I concentrated upon my musical instrument. Eventually, I took a breather; and gazing into the cemetery, noticed a shadowy figure sitting atop one of the illuminated grave markers. It appeared as a heavyset male figure sitting with an elbow on his knee and hand under his chin. At first I considered the possibility that I was looking at my then neighbor Brad, who used to live directly across from the cemetery entrance. On second thought however, I realized that it likely wasn’t him. Brad would generally drink when he got home in the evening; and at those times,  he’d become quite loud, almost obnoxious. There’s no way he could have resisted interrupting me. Further, the figure sat upon a grave marker that only measured an inch or two in thickness and stood only about 1.5 feet above the ground.

It was my job to ask visitors to leave the cemeteries after dark. On that night however, I decided to leave this particular intruder alone. There was simply something mysterious about him and I considered the possibility that he was enjoying my music.

The mystifying figure maintained his position for the next ten or fifteen minutes while I continued with my musical endeavors. Eventually though, I’d had enough and decided to go inside. I took a look at the visitor as I climbed off the wall and headed toward the cabin. I took only three or four steps before once again gazing back at the strange man. He was nowhere to be seen and had simply vanished within a matter of seconds.

Looking back on that long-ago incident, I can come up with no definitive answers as to what or whom I saw sitting upon that grave marker. I know this much though: No human being could have vanished from my line of vision as quickly as that shadowy figure did on that night.

There are a number of ghost stories associated with the hill that was once called East Mountain. I  take a certain satisfaction in knowing that I’ve related my personal tale to some folks that have come to visit here. Perhaps in the distant future a day will come during which those wishing to hear stories of the past will learn about the dark man who once sat upon a grave marker at the Confederate soldier’s final resting place. 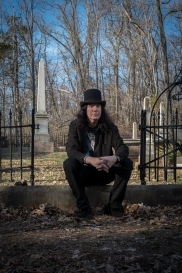 A.D. Vick is short story writer living in Northwest Arkansas and is the author of a blog entitled The Gothic Embrace, which features a variety of entries of interest to the Goth subculture. He is also involved with the maintenance and preservation of some historic cemeteries and spends his quiet time with one rather large cat named Mr. Gray. He enjoys listening to a variety of music, which ranges from heavy metal and dark wave to classical, and takes great pleasure walking through the woods and burial grounds that surround his home.