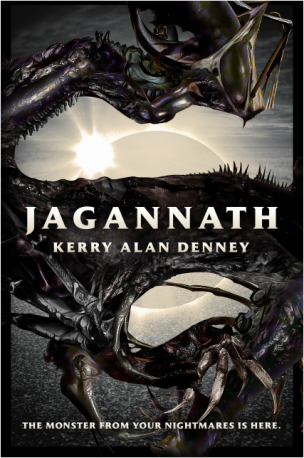 Jagannath by Kerry Alan Denney is about an evil unstoppable monster that is destroying civilization and bringing on the apocalypse, one city at a time. The name describes a Hindu god and means lord and master of the universe. Jaggernath is also the origin for the word Juggernaut and this creature is unstoppable, it absorbs humans and assimilates their intelligence growing stronger as it moves along.

Once it is done with the human race it will move on to the next planet and start all over again. There is hope though, a small band of soldiers is fighting back and one little girl named Lilly seems to be immune to the creature’s powers. Things may look bleak for the human race but as long as there is a few survivors there is hope.

My favorite character in this book is Lily. She is a fascinating character, this is a 13-year-old trying to make it on her own in the apocalypse. The Jagannath has wiped out over half of earth’s population including her family, she has raised herself and has learned about life through reading books. Lily constantly compares herself to the heroes that she reads about and sees herself as a coward, but its obvious that she is no coward.

One of my favorite parts of the book is when Lily is being held captive by a group of five abusive survivors. Lily gets tired of how they abuse their dog, her and each other. She even goes as far as saying she would prefer being with the monster over their company. As the situation escalates and Lily gets tired  of the abuse, she thinks to herself: “Fraidy-cats could only be pushed so far before they hissed and bared their claws.” At this point I found myself wanting to yell out loud: “Go get ’em, Lily.” I loved the idea that despite seeing herself as a fraidy cat, she is the toughest character in the book.

The people in Jagannath go through hell and back, but never give up. Another part of this book I enjoyed was when a soldier and a scientist speak with the monster and find out what the creature thinks of itself and uses the knowledge against it. This book got off to a slow start, I found myself wondering how the creature could be everywhere at once and I also liked the character of Lily so much that I didn’t like when the focus switched to other characters. The other characters did grow on me though and all my answers about the monster did get answered. I liked the fact that by the end I was feeling some sympathy for the creature as it gets revealed what it is and where it came from. I’m hoping  Kerry does a sequel to this story because I’m curious to see what comes next.

By the time I got to the middle of the book I was thinking this was an amazing read. It mixes mythology, philosophy, horror, science fiction and lots of action. There is also a theme of redemption with one of the characters that I liked.  You could teach a class from the deeper meanings that come through in this book. Jagannath is a book that works on several different levels and is a must read for Horror and Science Fiction fans.

One thought on “Book Review: Jagannath by Kerry Alan Denney”