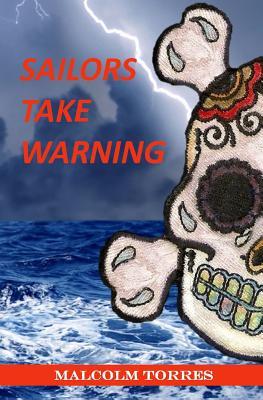 The USS Nimitz has been out to sea for 93 days on a top-secret mission. The U.S. Navy is testing a new cloaking device that will make it invisible to enemy ships. Things aren’t going according to plan despite the determination of Captain Fox to  advance his career and make it work at all costs. The ship was found despite its cloak and now bodies are disappearing from the ship’s morgue. The crew tries to cover it up but someone is also sabotaging the ships equipment and a small group of sailors are performing satanic rituals. Life gets crazy when you’re stuck at sea and there are some horrific things happening on the USS Nimitz. It’s up to a few good sailors to solve the mystery of the missing corpses and make the cloaking device work.

Sailors Take Warning by Malcolm Torres has some great characters in it, I liked hearing why everyone enlisted in the navy. So much detail went into each person that you got the impression that they were all based on people who the author knew.  The descriptions made you appreciate the diversity of the people on board adding realism to the story and showing what life must be like on a ship. For example I liked hearing how Kate Conrad got into the Navy. She knew it would give her money for student loans and another officer  went into the Navy because  the family farm was repossessed and it was the only way he could make a living. Another good part was the relationship between an executive officer and a young woman that gets a little twisted. Despite her fear she stays with the relationship because it is an escape from the boredom on the ship.

I enjoyed this book and all the references that were made about people in the Navy who live on ships for months on end. There are a lot of things that are described that I think we’re specifically geared towards people in the service. Despite the fact that I don’t have a Navy background, the ship references are what sets this apart from other horror novels and I liked that this book talks a lot about a way of life that I know nothing about. The author, Malcolm Torres is a navy man and he gives a perspective to this story that few people have and he paints a vivid picture of what Navy life must be like.

There are a lot of sub plots going on in Sailors Take Warning. In fact I thought the book felt more like several short stories that take place in the same setting rather than a cohesive novel.  While all the sub plots were interesting not all of them were necessary and there was so much going on I wondered what the main story was. That being said each short story was good enough to keep me interested. Sailors Take Warning isn’t a straightforward horror novel. It’s more of a high seas thriller with some science fiction, horror and mythology references mixed in. I still think there is enough going on here that horror fans will enjoy it, such as missing bodies, satanic rituals and a BDSM relationship that kind of freaked me out. Sailors Take Warning  is a thriller that will make you think twice before spending  time at sea.