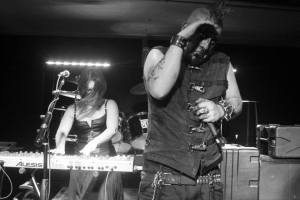 1996: Day of reckoning: Guitarist, Jared Scott gives birth to fury by the name of :[particle_son]: in the arid depths of California. After some change in lineup in 2008-2011: Death and Rebirth: [particle_son]: rose from the ashes, bent on destruction with breath of hell fire, Jared and Power Vocalist: Vex stuck the anvil hot forging a new legacy of pain and aural annihilation, with the fresh blood of Sandi Leeper (2012) abusing the keys, the creative blood flowed forth and work on “American Genocide” continued.

Particle Son has emerged as one of Portland’s hottest industrial bands. Coincidentally, Vex is also in another one of my favorite Portland “Shock-Horror-Industrial Bands”: Dead Animal Assembly Plant, whom Horror Addicts featured in 2014.

Particle Son has graced the stages of Portland with such acts as Prong, Psyclon 9, Dawn of Ashes, God Module, SMP, Consectum, Nocturn, Collide, Written in Ashes, Tragic Evolution, Twenty Shades of Red…and many others preying upon the hearts of the wicked with evil through music bred, corrupting the mind to unleash the beast within. fed by a savage nature to slay the our inner demons, lest we perish in the rapture of their disease…:[rise]: :[resist]: :[refuse]:

Vocalist Vex March has always held an affinity with horror. He says: “I grew up on reading Stephen King (around age 8) and watching Clive Barker’s work. The Hellraiser series has had a huge impact on me life, I was pretty sheltered so wasn’t till I got older till I got to branch out.”

:[particle_son]: is currently hammering away on their sophomore album “Amerikan Genocide” with the first single in over 6+ years with the new track “Dead to Rights” being available right now!