On May 27, 1922 Christopher Frank Carandini Lee was born in London, England. He was the son of Lieutenant Colonel Geoffrey Trollope Lee, of the 60th King’s Royal Rifle Corp and Countess Estelle Marie Née Carandini di Sarzano, whose lineage traces back to Charlemagne, the first emperor of the Holy Roman Empire. With such an aristocratic background, it is not surprising that young Christoper would go on to create a distinguished and record-breaking career in his own right.

After the end of World War ll Lee became interested in acting and made his film debut in 1947, taking on a one-line role in a Gothic romance film entitled Corridor of Mirrors. By the year 2007 however, he had set a record for the most screen credits of any living actor with an incredible 244 film and TV appearances over the course of six decades.

Lee had difficulty breaking into the acting scene during the early part of his career due to his being considerably taller than most actors chosen to play the films’ leading roles. The break he needed came in 1957 when London-based Hammer Film Productions asked him to play the role of the monster in The Curse of Frankenstein. Due to the success of that film, Hammer signed him up for future roles, which often involved him playing the villain opposite his friend Peter Cushing. Some of the most notable Hammer films he starred in included Horror of Dracula (1958) and The Mummy, which was released in 1959. Hammer Film Productions produced a number of sequels during the 1960s into the early 1979s during which time Lee continued in his role as Dracula. Although he is well known for his roles in horror films, Lee also starred in films representing other genres such as the 1974 James Bond film, The Man With the Golden Gun.

Due to his earlier successes, the actor moved to Hollywood during the late 1970s. America’s movie capital failed his expectations however, and Lee only made minor film and TV appearances. Eventually, he moved back to Great Britain where his slumping career underwent a revival. During the 2000s he was given the role of Saruman The White in the Lord of the Rings trilogy and Count Dooku in Star Wars; Attack of the Clones and Star Wars: Revenge of the Sith.

Christoper Lee’s deep operatic voice inspired him to pursue a musical career as well, where his achievements ranged from his singing the soundtrack on a film entitled The Wicker Man to his recording of two full-length symphonic metal albums. In 2010 he received the Spirit of Metal award for his album, Charlemagne: By the Sword and the Cross at the Metal Hammer Golden Gods event.

In June, 2001 Lee was made a Commander of the Order of the British Empire in recognition of his service to drama and in June, 2009 he was created a Knight Bachelor in the Queen’s Birthday Honours for his work in both drama and charity.

On June 7 of this year, Sir Christoper Lee departed this world. His talents, abilities and achievements far exceed the mere outline of his works, which appears on this page. He was a most distinguished actor and gentleman who will be deeply missed. Still, his incredible contributions to horror, fantasy and music will remain with us for many years to come. 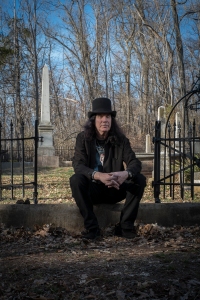 A.D. Vick is short story writer living in Northwest Arkansas and is the author of a blog entitled The Gothic Embrace, which features a variety of topics of interest to the Goth subculture. He is also involved with the maintenance and preservation of some historic cemeteries and spends his quiet time with one rather large cat named Mr. Gray. He enjoys listening to a variety of music, which ranges from heavy metal and dark wave to classical, and takes great pleasure walking through the woods and burial grounds that surround his home.

3 thoughts on “The Passing of Sir Christopher Lee”