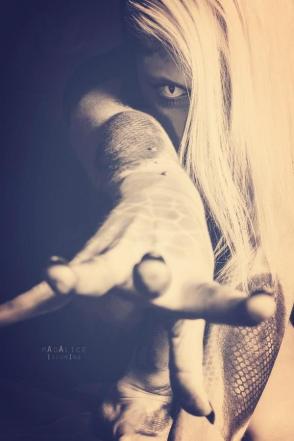 I have been blessed to be surrounded by such talent, living here in the great Northwest. There are many male-fronted amazing bands in the Gothic/Industrial/Metal genres here. A charismatic, strong female-fronted act is a rare gem and something that, as a strong female in the business, always inspires and delights me. Alicen Hensley, AKA mAdAlice, from the Portland area, is one of those inspirations.

Vocalist, Songwriter and Artist mAdAlice was born Alicen Hensley from Anaconda, Montana. Her musical concept, mAdAlice, is an up-and-coming metal project that began in 2010. After being rejected by a few bands, Alicen decided to take matters into her own hands. She attended audio engineering school to network in the industry. Soon after graduating she met mAdAlice co-writer/co-producer Matt Jefferson. With her lyrics, music concepts and ideas for the songs, the two worked on the project for three years. The results are the five-song EP, entitled Skin. Skin was released on Beltane April 30th,2014. A few months after releasing her first EP, Alicen met co-writer, Arnold Hablewitz and the two began working together. June 21st, 2015 Mad Alice released a single “Bless the Bitch” off her upcoming album set to release Halloween 2015.

Check out her videos, produced by Asher Vast of AVAST Productions and 2014 featured bands: “Endless Sunder and Desillusion”.