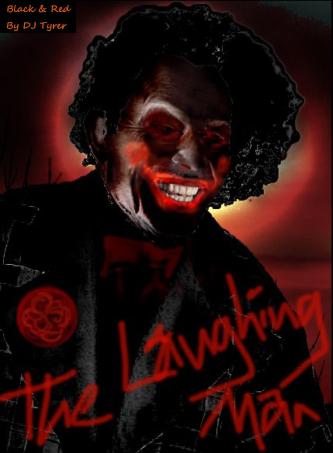 The estate echoed to the sounds of anger. Locals had gathered to protest against the closure of the Sure Start Centre and, in no time at all, they’d been joined by black-hooded anarchists who’d taken the opportunity to stage a generalised riot. With an ironic twist, the shattering of the Centre’s windows would mean it would be closed a while regardless.

Malcolm turned away from the sight of a masked and hooded figure waving a black-and-red bicolour flag in the midst of the glass fragments, and headed away as quickly as possible, back to his flat.

He wondered what the country was coming to: overwhelming immigration, war, cutbacks, riots – it was worse than the ‘80s. The whole country was collapsing into anarchy! What it needed was an old-fashioned dictatorship to sort things out. He spat in disgust when he saw the large graffito that covered the wall beside the door to his block, a sinuous design in red and black: obviously the work of those anarchist yobs, marking their territory in their battle with the police. Bring back the birch, he said. Bring back hanging! Even hanging was too good for them!

Inside, the block was no better than the rest of the estate. The stairwell stank of stale urine and was scattered with rubbish. It was crumbling and vandalised. It was just typical of the system that he was stuck here, in this waking nightmare of poverty and broken dreams, whilst some foreigner was milking it and living in some mansion, pumping out dozens of kids! He kicked a half-empty can of bitter down the stairs in frustration.

Malcolm’s own single-bedroom flat was just as bad. Tiny and cramped with walls caked with mould. He’d been onto his landlord repeatedly about the blight, but nothing had been done. It was like smacking his head against a brick wall trying to get something done about it and he’d more or less given up on it, accepting the smell and constant chestiness that went with it. On the news, the Housing Association had even attempted to blame the tenants for the mould in their own homes, as if they were all to blame for leaks and condensation. That was typical!

A loud bang made him jump. Some idiot had detonated a firework in the undercroft of the building. Loud noises and bright flashes seemed to satisfy simple minds.

With a sigh, Malcolm hauled himself up and out of the tired old beige sofa and made the short walk to the door.

Looking through the peephole, he could see a youth in a black hoodie. It looked like one of the yobs he’d seen earlier. He wondered what he wanted. He couldn’t see his face and that made him nervous. There seemed to be a badge, maybe a gang emblem, like the head of a court jester, on the chest of his hoodie.

Fitting the door chain, he opened the door a crack and asked what he wanted. The figure raised his head to look at him and Malcolm saw that it was Steve, a kid from down the passage. A bit of a berk, like all the kids these days, but not too bad, and, being from his floor, owed a certain measure of neighbourly respect.

Steve looked kind of agitated and sounded sort of strange, like he was high on something; hardly an uncommon occurrence around here, although he’d never known Steve to go on a drug-fuelled rampage like some of his peers.

“I need to come in, Malc. I gotta come in, right now; gotta show you summit.”

With an inarticulate cry of frustration, Steve slammed into the door, the security chain ripping easily away from the damp-rotted wood of the doorframe. The door slammed into Malcolm, staggering him backwards into the flat.

Steve burst in, shouting something about laughing that made no sense to Malcolm but sounded exactly like the crazed ramblings of a druggie. Malcolm recoiled in fear; he could see a knife in Steve’s hand. He’d read about youths flipping out on drugs and going on a killing spree. Or, maybe this was a gang initiation. Maybe it was both.

Malcolm looked wildly around for a weapon with which to defend himself, but there was nothing. It was in that moment that Steve’s knife found him, plunging into his side, once, twice, then a slash across his throat. The last thing he saw before darkness engulfed his vision was a swirl of red upon black as blood sprayed across the mould-caked wall. The last words he heard were “The joke’s on you!” None of it made any sense.

DJ Tyrer is the person behind Atlantean Publishing and has been widely published in anthologies and magazines in the UK, USA and elsewhere, including State of Horror: Illinois (Charon Coin Press), Steampunk Cthulhu (Chaosium), Tales of the Dark Arts (Hazardous Press), Cosmic Horror (Dark Hall Press), and Sorcery & Sanctity: A Homage to Arthur Machen (Hieroglyphics Press), and in addition, has a novella available in paperback and on the Kindle, The Yellow House (Dunhams Manor). This story previously appeared in the collection Black & Red, available from Atlantean Publishing.