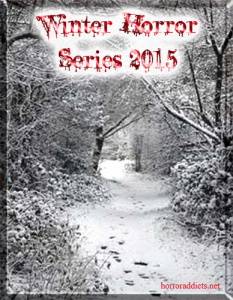 Several authors took part using a particular inspiration film and had a limit of 1000 words to play with. They had a lot of fun with the theme of Winter Horror and so the stories continue…

In the cabin Todd has rented,
Mary looks at the Christmas tree
he bought on the way and says
“It reminds me of what is
wrong with Christmas:
it is made of plastic and too expensive.”

Mary listens to the waves
crashing against the cliff below
which mystically calms her.
Mentioning this to Todd he says,
“It sounds like someone
is continually flushing a toilet.”

Mary had adopted Odd Todd
in high school because
his poetry turned him into a pariah.
She had held his hand for three years
enjoying his trembling, undisclosed
sexual longing for her.
Todd had kept his poetry to himself while
Mary spent her nights fucking college boys.
After a gang-banging at a pizza parlor,
everyone quit talking to her, except for him.

Upon graduation they had ignored each other; but,
seeing Mary at a bar at Christmas break,
Todd had asked her to dance,
expertly pushing and twirling her like
she was a slave to the music.
Drenched in sweat and smelling like 2 am,
it appeared that living away from a small town
that regarded them as untouchables
had been good for both of them.
She had stopped cutting red marks on her arms,
Todd was no longer shy and odd.
He had unashamedly pressed his erection against her asking,
“Why don’t we spend our Christmas day together?
I know a cabin we can rent.”
“I can do that,” she had simply replied.

In the Christmas Eve cabin
everyone is hiding something,
everyone has secrets. Mary says,
“You can hurt me, do whatever you like.”
Todd kisses her lips like a serial killer, and replies,
“It will be crazy beautiful, just like the sun.” 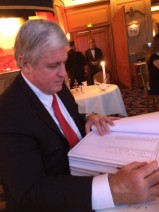 Harry McDermott enjoys writing,
especially when he can use it
like a knife to stab into the heart
of the unsuspecting reader.