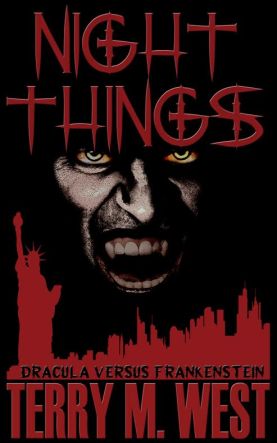 In a world where every creature of legend has stepped forward from the shadow to exist shoulder to shoulder with humankind, Bram Stoker’s Dracula and Mary Shelley’s Frankenstein meet for a final showdown.

New York City has become a macabre melting pot. Vampires, werewolves, zombies and ghouls are now the new immigrants and they are chasing the American dream. The Night Things have become part of the system. But many humans feel the creatures are dangerous ticking time bombs.

Night Things: Dracula versus Frankenstein is a new novel by Terry M. West. It features a battle between the biggest icons of horror in a world gripped with fear over the Night Things. The fate of the Night Things and humanity itself hangs in the balance of this monumental confrontation.

The Magic Now universe began with the book, Monsters and the Magic Now. Here are some review blurbs for that book:

“Will definitely leave an indelible mark deep within your soul!”-DIABOLIQUE MAGAZINE 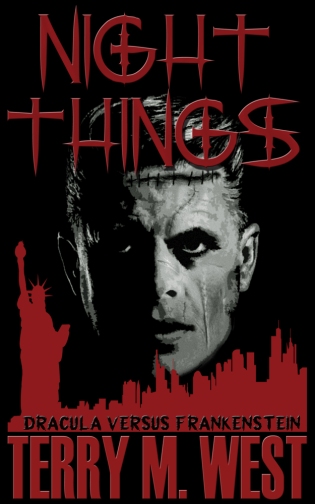 “Only Terry M. West could spin a tale so dark and brutal and still make it transcend horror and become a work of literary craftsmanship.”-Kevin Lintner, SANITY’S GRAVEYARD

“[Monsters and the Magic Now] is a nightmare on acid. It is beautiful, deep and sad.”-Heather Omen, THE HORROR NATION

“One of the most powerful and disturbing- yet incredibly entertaining things- I have read in decades. “-Michael Donner, Captain Creeper

“[Monsters and the Magic Now] is a super edgy, blood-thirsty tale that made me uncomfortable and left me wanting more. I love this story!”-Zachary Walters, THE MOUTHS OF MADNESS PODCAST

“What true horror is all about.”-SCARLET’S WEB

“I cannot overstate this: Horror fans looking for something truly original that will get under their skin need to read [Monsters and the Magic Now].”-author DS Ullery

“The story is full of dark places inhabited by dark characters – both in human and monster form.”-Stuart Anderson, The 5th Dimension

Critically-acclaimed horror author Terry M. West continues his Magic Now series with this standalone novel that presents a world only a slight shade darker than our own.

Pleasant Storm Entertainment, Inc. will release Night Things: Dracula versus Frankenstein onMarch 18th, 2016 in Kindle and paperback versions. Dracula will grace the Kindle cover while Frankenstein will be featured on the paperback edition. An audio-book will follow. It is available now for pre-order at this universal book link: http://bookShow.me/B019SFEHQK

****Terry M. West is a filmmaker, author and Active member of the HWA. He was a finalist for two International Horror Guild Awards and he was featured on the TV Guide Sci-Fi Hot List. He has been at it since 1997, but recent years have seen a strong rise in his popularity. His website: www.terrymwest.com****

One thought on “Press Release: Night Things: Dracula versus Frankenstein coming in March!”