Horroraddicts.net Publishing has recently published our 4th anthology called Once Upon a Scream. Remember the Fairy tales that you grew up reading? Well they are back again with a horror twist. Once Upon a Scream includes 18 tales that are fantastic and frightful. One of the authors in this anthology is DJ Tyrer and recently he talked to us about his writing:

What is your story in Once Upon A Scream called and what is it about? 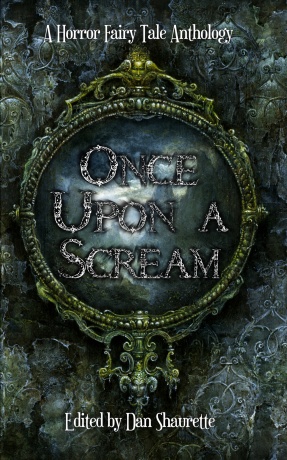 My story is “Gollewon Ellee” and recounts an encounter with the Fair Folk upon Harley’s Mount, which has been the location of several stories of mine. The title refers to the mysterious fairy lights seen upon the hill.

What inspired the idea?
The story draws upon elements of folklore for the Fair Folk, while the Mount was inspired by a real hill where my grandparents used to live. I didn’t see any fairies there, but it certainly wouldn’t have surprised me if there had been some!

I’ve written since I was a small child (it’s something I’ve always done). I have been writing (semi-)professionally for the last two decades while editing the Atlantean Publishing small press.

What are your favorite topics to write about?

I am most drawn to horror and folklore (which, naturally, intertwine nicely). Although my stories can take place anywhere around the world and are urban as often as they are rural, I have a special fondness for Harley’s Mount and its environment. Not only have I written several stories set there but also developed a lot of backgrounds (some of which was released in the booklet “A Breedon District Miscellany” through Atlantean Publishing).

What are some of your influences?

Lovecraft, without a doubt. Writers such as MR James and Jenny Nimmo were very influential on the Harley’s Mount setting. RW Chambers has been a major influence on my other main body of work. Collectors and redactors of folklore and folk history, such as George Ewart Evans, are also a major source of inspiration.

What do you find fascinating about the horror genre?

The infinite variety, because it is more a mood or way of looking at the world than a genre in the sense of the Western or Steampunk. Horror can be wed to any other genre and take place anywhere, at any time to any degree with ease. Allowing it to constantly mutate and explore the darker recesses of our humanity, always surprising and shocking us in new ways.

What are some of the works you have available?

I have stories a number of anthologies (which can be found on my site) and my novella “The Yellow House” is currently available from Amazon in paperback and on the Kindle. “A Breedon District Miscellany” and “Black & Red” (a collection of urban horror stories, also available in PDF) are available through Atlantean Publishing.

I am currently co-editing a King In Yellow anthology called “A Terrible Thing”. Which should be available at the end of the year while I also have a couple more horror novellas in the works.

One thought on “Once Upon A Scream Author Spotlight: DJ Tyrer”