Reginald Snubb was a man in his late forties, bald except for two cottony puffs of hair that simply resisted the barber’s scissors–sheered, they would grow back in a fortnight, bigger and puffier than before. Other than that, and his prominent round nose, the roseate color of which appeared evidence of secret tippling, and a burgeoning double chin, he was reasonably good-looking, one might say well-preserved for his age. Even so, he was ashamed of his appearance, did most of his business by phone or email, and spent his time immersed between the covers of his favorite books. He loved books as much as he hated clowns. And he really loved books.

Clowns were a different matter altogether. There was something uncanny about them; they, in fact, anything to do with the circus arts, sent a bolt of terror up his spine. When McDonalds ads appeared on TV or before YouTube videos, he would switch channels, avert his eyes, try to focus on things that made him feel at home. Things that didn’t seem to jeer and leer at him through the screen. There were certain segments of town he avoided, and one block in particular–hell, one neighborhood–he took pains to circumvent. A dull pain would begin to throb at his temples when he got within five miles of the place, and flashbacks of harlequins in whiteface, mimes and figures on stilts shot through his mind with strobing intensity. He seemed to feel a ghostly kid-gloved hand close over his as he gripped the steering wheel tightly, trying not to steer off the road as he blurred his vision to ignore the looming billboard for the latest scary clown movie the studios kept churning out; and sometimes, when he was very tired and driving at night, he would see a pale face in the rear view mirror that simply wasn’t supposed to be there.

Snubb knew his fears were irrational, and that the effort to avoid clowns was limiting his lifestyle. Not only that, as a businessman he couldn’t afford to kick the clown dollar out of bed. A carnival was coming to town, and Snubb’s acreage was ideal real estate on which to erect tents, rides, a funhouse and all that kind of thing. Inevitably he’d get a call from the property manager, and if the carny credit was anywhere decent–better if they had the cash on hand–he would pretty much have to welcome the greasepainted mob to his turf.

Sitting with his shrink, Snubb explored different methods for overcoming his phobia. Finally, Dr. Strudel suggested aversion therapy–confronting his fears directly. The therapy might involve, for example, draping his study with circus posters, pictures of clowns, rubbing cotton candy into the doors and window frames, saturating his senses with the sights, the smells and–but he drew the line at whatever clowns might taste like.

“You’ve got to get beyond this,” Dr. Strudel said, scribbling furiously in a pink leather bound notebook. He peered over his half-glasses at Snubb, who was curled up on the couch in a fetal position. “It’s not healthy for a grown man. And no, I’m not suggesting you go out and lick a clown, for heaven’s sake’s. Be reasonable. Have some peanuts lying around, this kind of thing. Those little aluminum foil packets. So salty and tasty…”

“Maybe I could start by reading a book on the subject,” Snubb said. And thought: He’s right…those peanuts are delicious. The best thing about airplane food.

“Well sure, if you want to use the slow immersion approach.” Dr. Strudel scribbled some more in his notebook and drew his fingers through his Groucho-esque mustache. “But didn’t you get a call from your property manager today, something about a carnival coming to town?”

Dr. Strudel coughed and mumbled something into his dictaphone. “You should check your messages more often. You can use my cell if you like.”

“That won’t be necessary,” said Snubb, his face draining of all its color. How did Strudel know these things? Had he babbled under hypnosis? Was the doc connected to some kind of… Snubb stopped the thought before it could unspool whatever paranoid delusion prompted it. Just as he tried to chop off the thought that succeeded that one before it had a chance to bloom. This notion, however, flooded his brain anyway.

Is it just my imagination, or does Strudel have an abnormally large shoe size? And why didn’t I notice that before? Does he have a cold, or is his…bulbous nose, which looks like one of those artificial cherries now…“I’ll go down to Barney’s Books today,” he said, abruptly unfolding his lanky body from the couch and rising. Just before he closed the door, he seemed to glimpse a child’s balloon scudding against the window glass on the third floor office, a pair of kohl-haloed eyes…

But books–now those were safe. He loved books. Books of all kinds. If he came upon something upsetting, he could simply close them. And so what if a book happened to contain clowns? Was even devoted to the subject? Snubb had gotten through Rabelais without incident, and the classical French author was all about the carnivalesque.

Two hours later, Snubb gingerly removed the volume from the medium-sized paper bag with the Barney’s Books logo stamped across it, turned on his study lamp, adjusted his reading glasses and began to peruse A General History of Clowns (Cherrynose Press, 2012). 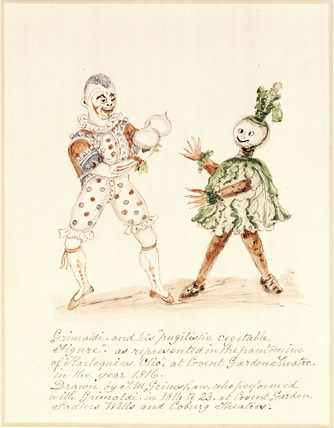 The frontispiece depicted a fearsome-looking member of the tribe in full regalia, apparently boxing with an animated cabbage, along with this caption: “Joseph Grimaldi (18 December 1778 – 31 May 1837) an English actor, comedian and dancer, who became the most popular English entertainer of the Regency era, chiefly for his portrayal of the harlequinade role of Clown. Grimaldi’s whiteface make-up design were, and still are, used by other types of clowns.”

Fingers of cold fear traveled along his arms. He could swear he’d seen that face before. But where? He dropped the book on his desk, face-down, and thumbed his cell phone, scrolling through his messages.

Sure enough, there was one new message: 12:15 pm, Bartlett Properties.

Snubb decided to listen later. Although he knew this wasn’t brave of him, and certainly went against both the letter and spirit of Dr. Strudel’s counsel, he simply couldn’t stand to hear the saved call. Feeling like the lowliest form of a coward, he turned the book over and flipped to the first page of the text proper. And read this:

“Reginald Snubb was a man in his late forties, bald except for two cottony puffs of hair that simply resisted the barber’s scissors–sheered, they would grow back in a fortnight, bigger and puffier than before.”

Snubb refused to read of whatever horrors followed. There were a few possibilities: either he had become locked into a Julio Cortazar pastiche, his fate destined to match that of a character in one of the South American master’s fictional puzzle boxes, or he was going quietly insane, like some armchair-bound scholar in a Poe story. He glanced around him, but the study looked the same as it always had: muted brown wood, framed photos of ancestors who bore the same genetic curse he did–which comforted him and made him feel less like a freak–an enameled purple box he never opened which held family heirlooms, a hole punch, a stapler and a pencil holder, among other standard office supplies on his desk.

He wracked his brain for a solution to the dilemma he found himself caught in. It was as though the universe was pressing him to take on his darkest terrors head-on. He’d thought reading about clowns was the safe thing, but it turned out to be the exact opposite. He’d thought putting off the message was a prudent decision, given his state of mind. Now, though, his choices had shrunk, atrophied as surely and inexorably as his hair follicles–except for those pesky cotton puffs.

Snubb picked up the cell.

He found the message from Bartlett Properties, held the phone to his ear, took a deep breath and pressed “play.”

At first, nothing; then, the crackle of static, through which he faintly discerned the wheezing, underwater warble of a calliope. The honk of a bicycle horn, loud enough to nearly make him drop the phone. And a sly, insinuating voice.

“There’s no point in hiding from your legacy, Snubb. You know what they say in our profession–once a clown, always a clown. In your case, clowning comes naturally. You might say it’s in your blood.”

No! This was madness. There had to be some rational explanation. Snubb tried to rise from his chair, but an invisible hand–the same kid-gloved fingers that had closed on his while he drove around the dreaded downtown neighborhood–settled on his shoulder and pressed down.

“Take a look in the mirror, Snubb. A nice, long look. Don’t worry, I’ll be here to help you adjust. I’ve always been here. I’m you.”

Clutching the cell to his ear, Snubb walked out of his office, down a hallway that scrolled with circling spotlights of green, blue and red, as the calliope music rose, as his size 14 men’s shoes closed the distance between himself and the mirror at the end, right next to the kitchen.

He gazed for a while at his reflection. The cherry red nose, the furry orange eyebrows, the pink tufts that jutted from behind his ears. He looked down at his shoes, and the reflection seemed to wink at him.

So there was no Dr. Strudel after all–it was a ridiculous name to begin with. No property manager, no acreage to rent. The book was real enough, but then, any clown with a credit card could buy the ubiquitous history and take it home with them. In the end, it was just him–Snubbsy the Clown, a carny in denial.

The sheer absurdity of it all came at last into blinding focus, and as he began to laugh, he heard a chorus from the kitchen, and his study, and his living room, a chorus of echoes from his carnival fraternity.

Snubbsy laughed until the tears ran down his cheeks and smeared the greasepaint he applied every morning with automatic precision.

2 thoughts on “The Clown Oroborus by Alex S. Johnson”