On May 5th 2016 Marc Severson released his first novel called Chaos Territory: Book One in the Chaos Series. Here is the blurb: 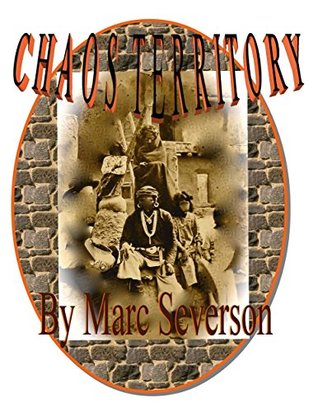 Welcome to the Weird Wild West! Matthew Sandstrom is a Government Land Office agent in Chaos, Arizona Territory ca. 1900. He is drawn into a series of disturbing circumstances involving a family of homesteaders who are missing and a trading post that serves a mysterious tribe known as the Su’mok. When the wife of the trader at the post is found wandering in a nearly catatonic state and her husband has also disappeared Sandstrom is alerted to the dark advance of ancient dangers. Discovering that a primordial terror has been unleashed he sets out to do his best against unknown powers. With the help of some Indian allies and his friend Mose Broadaxe he challenges indescribable forces for control of humanity’s future on earth. Set in the southwest at the end of the most famous era in American history, the Old West, the story seeks to engage the reader in a historically sound adventure that also incorporates the eldritch charm of Lovecraft with primal lore and legend. This is the first book in a series that take place in the spectral, dying, mining town of Chaos, Arizona Territory.

Born in Elgin, Illinois as a life-long Cubs fan I know how to write of despair, terror and sadness. The move to Arizona in the mid-sixties allowed me to become a confirmed desert dweller of the first rank.

Trained at the University of Arizona as an archaeologist and educator I also am a self-taught raconteur. Despite the many rewards I have garnered, both physically and spiritually, from these disparate professions I have always said that one day, when I grow up I would like to become a writer. Recently I’ve decided that I don’t want to wait that long so I’ve entered the ranks of the published.

I no longer work as a teacher (after 32 years) or an archaeologist (I started in 1972) though I remain vitally interested in both professions and each has contributed greatly to my writing. I love to tell stories whenever anyone wants to listen or the spirit comes upon me. I have performed several times at Tucson Meet Yourself, Tucson Festival of Books and at various schools and libraries across Arizona. I am a member in reasonably good standing of Tucson Tellers of Tales, a professional storytelling organization that you may find more information about on Facebook.

Married for over forty years to the same incredibly patient woman, Susan, we have four daughters and currently spend much of our time herding six grandchildren.

“Chaos Territory” is the first book in a series that is based on several Lovecraft inspired short stories I wrote while in college. It is intended for adult readers due to language and situations.

I have completed the first drafts of the next two books in the series and hope to see them published soon. I am also at work on the first book of another series of mysteries set in prehistoric Arizona and a novel about archaeology called “Bits of Sky”.

A critical issue for me is finding some way to preserve the stories that I tell, at least those of mine that are personal ones and several that I have created for children. Because of that I have recently started uploading some of my storytelling from the Tucson Festival of Books on YouTube.