Looking for some movies to watch this Thanksgiving? Here’s some suggestions that still hold true… Which one or two will you be watching this holiday?

Put the babes to bed and send the boys to the football game while you pour a glass of Chianti and nestle in for these demented families, cannibals, hungry werewolves, thirsty vampires, and more tasty terrors!

Children of the Corn – This original isn’t the best, and the entire series is fairly lowbrow in plot and effects. Nevertheless, all those rustling cornfields, creepy kids, and plant worship go a long way for a post-Halloween Harvest marathon. Name players come and go despite the low-budget status; and even if you’ve never actually seen all-count ‘em-seven films, you’ve probably heard of ‘He who walks behind the rows.’ I prefer Children of the Corn III: Urban Harvest myself. And to think, I grew up on a farm.

Hannibal – This 2001 sequel to Silence of the Lambs obviously has big shoes to fill. Thankfully and blessedly, Giancarlo Giannini (Casino Royale) is great, and the Italian scenery is flat out awesome. Ray Liotta (Goodfellas) is sleazy and so much fun while the twisted Gary Oldman (Bram Stoker’s Dracula) is unrecognizable. Even in the shadow of prior Clarice Starling Oscar winner Jodie Foster, Julianne Moore (The Hours) shapes her own Clarice beautifully. And but, of course returning Oscar winner Anthony Hopkins is wonderful. He is without a doubt the star here, and does the most in what seems like less screen time. The one on one dialogue and action sequences are perfect, with fine suspense pacing, intelligentsia horror, class, sexy, and gore. Unfortunately, however, great the performances are in getting there, the storyline does meander. Director Ridley Scott’s (Blade Runner) ending is somewhat flat and leaves a ‘What was the point of all this?’ feeling. Nevertheless, I applaud the twisted romantic aspects and creepy for adults only production. Twilight wishes it could be like this.

The Insatiable – Sean Patrick Flanery (Young Indiana Jones) and Michael Biehn (The Terminator) are both very cool guys who, after some

seriously great stuff, have made their share of clunkers. With that in mind, one wonders if this unconventional 2007 vampire comedy romance can pull off what is so often an uneasy mixing of genres. The mood certainly doesn’t start as horror, and the “Average Joe” life sucks montages get old fast. Actual time punch cards, full-size desktops, pop up AOL email, and typing in all caps replete with old lingo such as “shit is wack” and “word”? The funny and sexy in that anti-hip sardonic way also tries a little too hard, and the black comedy is uneven between the horror research and dark action. Some jokes work – ordering blood on the web, needing a coupon for a big bag of lime – Biehn is bemusing as a wheelchair bound vampire-hunting badass, too. However, some of the dream-esque flashes are off, and the bare minimum blood and gore and standard sweaty chick in a tank top hardly warrant an R rating. Charlotte Ayanna isn’t necessarily weak, but the character is too cute, hip, and poorly drawn to be sexy, evil, and dangerous. Miss Teen USA a vampire does not make. The end is a bit obvious, yes, and the pace never quite balances the humor and dark or seriousness. This should have been a straight horror comedy instead of some depressing mood thing – and yet this nothing stellar, direct to video fair is good for a fun late night viewing.

Medium Raw – John Rhys-Davies (Lord of the Rings) is good to start this 2010 wolf meets asylum romp. The maniacs and asylum hang-ups are indeed better than the usual haunted madhouse types, but the wolf designs are unfortunately kind of dumb. Writer/director/hero Andrew Cymek (Dark Rising) is a bit too new and weak as well, but the scary ideas and effective killing concepts are played pretty straight. Okay, so the title is totally stupid, the subtitle Night of the Wolf is even worse, the twist is a bit obvious, and there’s nothing superior here. However, the getting there is good with a few better than expected jump moments. Great claustrophobic sets allow room for dark fears to play (even if that dang title doesn’t give the film much of a chance!) and uses of red lighting, cannibalism, kitchens, and more warped fetishes add to the creepy. Modern jagged camera attempts and silly, unnecessary dream/ghost hinges over do it just a bit, but the Red Riding Hood motifs are just enough. Refreshingly not used for sexy boobs and nudity distractions, Brigitte Kingsley (W/D/H’s wife) and a surprisingly fun Mercedes McNab (Buffy) keep it all together along with X-Files alum William B. Davis. I do however, wonder why new horror movies waste time on intercutting cool credits? No one else does anymore.

Motel Hell – You just know what the secret ingredient is in this 1980 country cannibal thriller! Ironic use of hillbilly music and television evangelist Wolfman Jack contribute to the charming and quaint but disturbed feeling here – the mix of late seventies styles and early farmhouse contentment doesn’t seem dated at all. Hanging pigs and slaughterhouse gore aren’t too over the top, but enough bloody suggestion and touches of nudity and kinky accent the dark humor and bizarre yet sentimental familial relationships. Rory Calhoun (How to Marry a Millionaire) has some sick and disturbing fun here yet remains strangely endearing, heck, even likeable. Vincent Smith’s reducing the riff raff population and keeping the community fed – it all seems like a real win win, and the winking tone pokes fun at this irony without being laugh out loud. The audience can chuckle at the soothing New Age eight track music amid the escalating events and interfering romance. Who’s next? When will the good guys find out? The pig mask and chainsaw duel in the finale are stupid and not scary now, hampering the otherwise bemusing wit and multi layered action. However, all in all this is some down home simmering and well done entertainment. 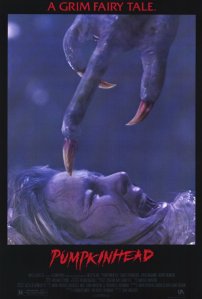 Pumpkinhead – Lance Henriksen (Near Dark) stars in this delightful 1988 backwoods tale full of deepening vengeance and deadly mayhem. Late Oscar winning creature master Stan Winston (Terminator 2, Jurassic Park) directs this taut, sorrowful thriller beautifully while fellow effects designer and performer Tom Woodruff handles the gruesome titular monster. Understandably, this does make the monster look slightly Alien in stature, but the mystical resurrection and freaky pursuits remain solid thanks to the familial revenge and action torment from Henriksen. Awesome as his design work is, why didn’t Winston direct more? Sweet a character cult favorite as he is, why wasn’t Henriksen a leading man more? His predicament is instantly relatable for parents – how far would you go? Pumpkinhead does what the vengeful aren’t capable of doing, but his deeds consume them nonetheless. Perhaps the shocks, thrills, or gore here aren’t super scary, but these ends justifying the means questions are scary concepts in themselves. Yes, there’s no law enforcement, some redneck dialogue is frustrating, and the middle of nowhere witchery may be too much for viewers wanting more polish. Fortunately, there’s atmospheric red lighting and nighttime photography, and the largely outdoor happenings are perfectly dirty, dusty, and desperate – matching the very effective personal scares, dementedness, and questions on right and wrong perfectly.