Imagine you live in a world where any crime, from murder to having a difference of political opinion, is cause enough for lifetime incarceration?  The governments which come to mind probably are Nazis, communists, and, to some people, the United States’ current political climate.   Dystopian stories are some of the scariest ones you can read.  True, there may not be blood, gore, monsters, or jump scares like the traditional horror stories utilize, but they deal with people as the monsters.  People so desperate for relief from red tape, corruption, and chaos that they are willing to give up freedom to feel safe and in control. 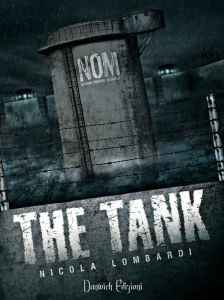 “The Tank” by Nicola Lombardi tackles the dystopian story very well and in a pretty believable manner.  It is the future, and a military coup has placed the New Moral Order (NMO) in charge.  When is person is convicted of a crime against the NMO, they are delivered to one of nine Tanks for storage.  The Tanks look fundamentally like grain silos, however there are no cells inside.  The “guests”, as the training manual refers to the prisoners, are tossed into the main cylinder of the building and left to suffocate and rot among the other prisoners.  Those who survive the landing struggle to survive as refuse until a quarterly Cleaning, which involves acid, occurs.

Giovanni Corte is named the Keeper of Tank 9, one of the more sought after positions.  For enough money to relocate to an island with no more worries, he sacrifices one year of his life to run the facility.  Spending a year with little to no human interaction, save for the brief daily prisoner deliveries, plays on a person’s mind.  Before long, paranoia begins to rear its ugly head, which only gets worse when he finds a diary possibly left for him by the previous Keeper.  In that are mentions of spirits roaming the halls in revenge for being tossed into the Tank.  Things only get worse for Giovanni as the story progresses.

I thought the story was well told and you got pulled into the story pretty well.  There are a few spots where you notice that the translation from Italian didn’t work out as smoothly, but overall, I really enjoyed this book.  If dystopian stories are your cup of tea, definitely check this one out.

Until next time, Addicts…

2 thoughts on “Review: “The Tank” by Nicola Lombardi”