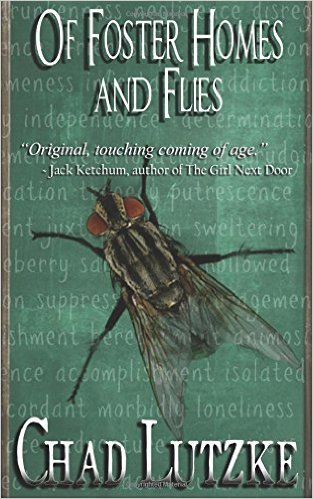 12-year-old Denny has not had an easy life, his father died and his mother is an alcoholic but he believes in keeping a positive outlook and doesn’t let it get to him. What he really wants in life is to accomplish something and for Denny that comes in the form of a spelling bee. He was too scared to sign up for it last year so to redeem himself this year he signed up and has been practicing non-stop. Life happens though and one week away from the spelling bee he wakes to find his mother has died.

Denny and his mother have had a complicated relationship that borders on mental abuse. Danny wants to do the right thing and call 911 but he doesn’t want to get stuck in a foster home and never compete in the spelling bee which to him is more than a competition. Denny decides that the best course of action is to keep his dead mother a secret until after the event which won’t be easy with the hot weather in New Orleans.

Of Foster Homes and Flies by Chad Lutzke is a brilliant coming of age story. This isn’t your average horror book, it’s more like a human drama with elements of horror in it. Denny is a child but is suddenly forced into an adult situation and isn’t sure how to handle it, but he does what he feels he has to do with a guilty conscience eating away at him the whole time.

Denny is a kid that you have to love, what he really wants is to be a normal kid but that can’t happen so he feels the least he can do is become spelling bee champion before he starts his lonely existence in a foster home.  Denny isn’t totally alone though, he has a friend named Carter and meets a hitchhiking girl named Sam. Denny never lets on what he’s going through and both characters still manage to help him in their own ways. I got the feeling that Chad Lutzke really understood how kids would act in this kind of situation because all the characters came across as real kids.

Of Foster Homes And Flies is a masterpiece, the length of the story is perfect and the main character may not be the kid next door but he wants to be. Denny is growing into a man but has no one to help guide him so he tries to figure out things on his own. He does a good job wrestling with his emotions and taking care of himself. I could hardly put down this book. I love the thoughts that Denny deals with along with the choices he has to make while feeling completely alone.  You have to feel for the character and I love how even when he does something bad he feels shame but sees it as something he must do. Of Foster Homes And Flies is a beautiful story that fans of all genres of books will enjoy.