Author: Kirin Johnson
Website: http://odditiesbizarre.com/pictures-zombies/
Kirin Johnson is co-owner and writer for OdditiesBizarre.com. She is also a CNA and caregiver for adults with disabilities. She is currently pursuing a nursing career. Kirin enjoys expressing her knowledge on odd topics through blogging. Her favorite topic to write about is weird insects and animals. 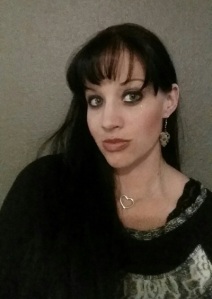 How I Got Into Creating Horror Dioramas
When I was a little girl, I used to collect bugs and create make-believe homes for them.The only problem was, they didn’t live very long. While they were alive, I enjoyed seeing them crawl and utilize my own creations. Unfortunately, I couldn’t show them off for very long.
In addition to make-believe homes (which were made mostly out of mini cereal boxes), for some scenes, I also added various objects. For example, when I was about 8-years-old, I made an ant farm. However, this was not your typical ant farm. It contained many red ants, a farm that was made out of 3 mini cereal boxes, and a little Freddy Krueger toy. I called the farm “Freddy’s Farm Of Victims.” The red ants were the souls of Krueger’s bloody victims.
My Inspiration: The TV Show Oddities
It wasn’t until I became a big fan of the TV Show Oddities that I realized I should get back into my childhood hobby. After watching an episode which involved Mike Zohn on a mission to find bugs for his customer’s diorama project, I got interested in making my own dioramas.
The big difference from back when I was a child is that today I am able to go online and find real dried insects. I no longer have to have living insects that die on the diorama forcing me to start all over again. I could now create dioramas I can keep for the rest of my life. With the many available resources online, I knew I can create scenes using virtually anything I wanted. Not only that, I could show off my horror art to my friends and family through social media.
Before I share one of my favorite art projects, I must mention that with all my dioramas (including taxidermy), all died from natural causes. They were purchased from well-known websites.
Zombie Insect Diorama 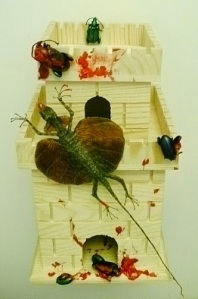 If you love horror art, why not create a scary diorama? When I say “diorama,” I mean a scene using real dried insects. With an insect diorama, you can make a scene with the creepiest and funniest-looking characters. Fortunately, you can get these little guys for very little money.
This is a diorama I created using several real insects. The scene is called Flying Insect Zombie Attack. Read the story below, as well as the materials I used to complete the odd art project.
The Story
In a distant planet called Planet Lizzylick, there lived an evil dictator named Brainzilla. After murdering thousands, brave and very angry rebels kicked him straight out of his planet. His dismissal left him homeless and without any food or liquids. At this point, Brainzilla had no choice but to find a planet that provided all of the right resources for his survival. After flying through the Universe for three days straight without any nourishment, he finally found what he was looking for. The small-sized planet was called Planet Castle. Luckily for Brainzilla, it wasn’t that far away from the planet he once ruled. Plus, it had plenty of food to help satisfy his massive appetite. Colorful beings of small and medium sizes populated the entire planet. Sadly for these little guys, all of them combined were no match for Brainzilla. For food, he would eat the brains of around 50 heads. He survived by also drinking their blood.
What this mean beast didn’t realize after eating his last meal is that he probably will never eat again. That is, because the next planet nearest to Planet Castle was 20,000 light-years away!
The Characters

Brainzilla: A flying lizard from Indonesia.
Tiny Colorful Beings: Three Sagra longicollis from Thailand.
Medium-Sized Colorful Beings: Two Sagra buqueti from Malaysia.
How To Make Your Own Horror Insect Diorama
Below is information on how you can design your own unique horror diorama.
Pick A Type Of Scene
Whether you choose a scene from your favorite horror movie, or create your own original scene, you have plenty of ideas out there. Once you figure out what type of scene you want to go with, it’s time to come up with a plan. You will need to think of everything you are going to need to make it all come to life. This includes the scenery and the characters (which in this case, would be the insects you are using). Of course, if you are putting your own scene together, you will also want to spend some additional time thinking of the story behind it. 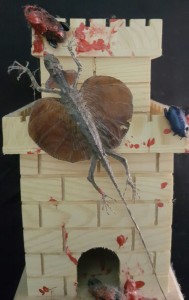 Think About Your Characters & There Specific Roles
Once you know what you are going to need for your bug diorama, envision what you would want the characters in the scene to look like. Since most bugs already look ugly and scary, it shouldn’t be at all difficult to find some evil-looking characters for a spooky horror scene. You can find a friendly-looking character as well. There are so many different types of insects (including non-insects such as those creepy spiders) you can find online for very low prices.
Basic Materials Needed
If you have an interest in creating a diorama using insects from around the world, I have great news for you: The project is extremely affordable. Plus, the materials are quite easy to find.
⦁ Basic necessities such as wood glue, a glue gun, paint and paint brush.

⦁ The main materials for your chosen scene. You can find the perfect stuff for almost any horror scene at stores like Hobby Lobby and Michaels. For example, you can make a small scene with a small cardboard box and a moon in the background, or a larger one with actual wooden make-believe castles. Your options are virtually endless.
⦁ Additions to the scene. This includes items such as fake blood (for example, acrylic paint), toy weapons, background scenery and any other necessary accessories.
⦁ Insects (or non-insects, depending on the type of diorama), which are going to be the characters in the scene. You can find insects of many kinds through well-known retailers such as eBay and Etsy. You can also find some actual insect stores on Google.
For dioramas using animals (such as squirrels and mice), you can also find them on the websites I previously mentioned. Always check your state laws before purchasing.
That’s It!
Now you have the basic materials and a good strategy for designing your own insect dioramas. Just remember to be extremely careful handling them as they can be very fragile.