For the season finale of HorrorAddicts.net, let’s take an overseas journey to the Aokigahara Forest, in the shadow of Mt. Fuji in Japan.

The forest is about a two-hour journey from Tokyo, but that hasn’t stopped people from visiting for the beautiful sights, the macabre discoveries, and others for ending their lives. It is estimated that 500 hundred individuals have entered the forest since 1950 and never left alive, with a record-setting 105 deaths reported there in 2003.  Approximately seventy sets of human remains are discovered in the forest every year, some so old they are only moss-covered bones when they are brought out. 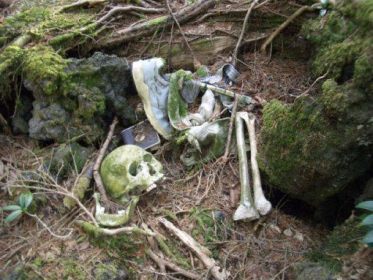 Then there is the paranormal aspect of the forest. Due to a number of suicide victims not yet discovered, many spiritualists believe that the souls of the dead have permeated into the trees themselves, adding to the difficulty of escaping the forest once inside.  Once discovered, the bodies of the departed are brought to the ranger’s station, where they await removal from the park.  Each time one unlucky ranger must spend the night in the same room as the body(s), since leaving them alone overnight is to deal with a moving corpse and a screaming yurei, or ghost of the departed.

Some additional facts about the Suicide Forest are:

For those who are considering suicide, know that there are people who care about you, understand the pain you are going through, and want to help you through it all.

Until next season Addicts…