Only the future will reveal if their telling will be Mishawaka’s ungodly undoing!

A meeting of youthful inquiry and aged intellect coalesce to reveal the tales behind the secrets. Only the future will reveal if their telling will be Mishawaka’s ungodly undoing! 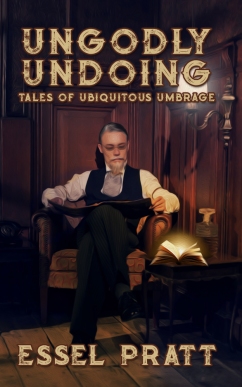 Ungodly Undoing: Tales of Ubiquitous Umbrage exists Parallel to the novel, Lacrimation of the Leviathan.

Essel Pratt is a master of horror and fantasy, conjuring tales that haunt souls and inspire imagination. As a student of psychology and teller of tales, Essel writes to share the complex nature of his imaginings with the world. His ever-expanding catalog of short stories spans multiple anthologies and collections, ranging from whimsical fantasy to bizarre horror, including everything in between. Dedicated fans have praised his creations, labeling his talents as prolific in substance.

Ungodly Undoing: Tales of Ubiquitous Umbrage is Part of Project 26, P26, a series of 26 books, each one representing a different letter in the alphabet, with each letter in turn represented a horror-related concept that starts with that letter.

Essel Pratt can be reached at the following: