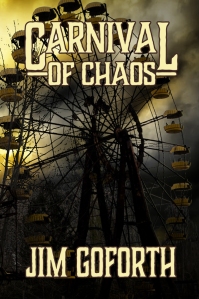 What do you get when you add a missing proprietor, disgruntled carnival employees, suspicious police officers, a nerdy best friend, hulking goons, freakish sub-humans, and two bloodthirsty brothers? You get Carnival of Chaos, an unpredictable and enjoyable first entry in the Festival of the Flesh series.

The story begins with the disappearance of Chippy the Champ, proprietor of the Classic Circus Carnival. A menacing man called Mister E has taken control of the carnival and his vision doesn’t gel with the previous owner’s. Mister E wants to offer horror-themed entertainment and not all the employees agree. Enter, Loco, Blades, Stix, Angelique, Minx, Cleo, and Ben. These seven oppose Mister E and his usurpation of the carnival. They are joined by Jason, the surprising main character of the book, a man with a crush on the beautiful Angelique.

Mister E doesn’t deal well with resentment. He not only fires the eight workers, he orders his goons to eject them forcibly from the grounds. They’re not allowed severance pay or their belongings.

The antagonistic eight vow revenge and return to the carnival a few days later in order to enact it. When they enter Mister E’s trailer they find their belongings, a great deal of cash, and more than they bargained for.

Mister E is not what he seems, and the carnival is cover for something far more sinister. As the crew discovers more and others are drawn into the web, Mister E discovers how formidable his opponents are. His desire to add them to his Festival of Flesh increases tenfold.

Jim Goforth’s prose flows well and each of his three-dimensional characters are believable and well-drawn. Loco, the illustrated man, is dangerous and mysterious. He is the leader of the group and for good reason. Blades is the carnival knife man. His friendship with the clown, Stix, is enjoyable and genuine. Angelique is an acrobat and just as dangerous as the men. Minx is timid, a spoiled rich girl who trains elephants. Cleo, the tiger girl, is smart and brave. Ben, the circus strongman, is a big teddy bear…until you cross him. Jason is an every man and metal head. Jason’s motivations and emotions bring the story to life. He is along for the ride and he’s a resourceful and loyal friend. Mr. E and his brother, Hunter, are great villains. Both are perverse and twisted showmen. Every story must have a suitable adversary and they fit the bill.

A good writer forces you to care about the people he’s created and Goforth does just that. I found myself terrified, not only by the frightening and bloody situations but by the fact my favorite character might meet an undignified and sickening end. His villains are just as realistic as the heroes. These are people you wouldn’t want to meet in a dark alley or on dark carnival grounds.

Goforth’s building of suspense and foreshadowing of events is excellent. His twists are unexpected and many times, unpredictable. It’s refreshing to read about smart characters, people who need not do stupid things to advance the story. Case in point, one of my favorite parts involves Mister E’s plan to ambush the crew at a motel. He sends a cohort called Desmond to do the dirty work. Desmond discovers how dangerous the ex-performers are.

Carnival of Chaos is reminiscent of an 80’s horror film. It’s fun and frightening. I can’t wait for the next book in the series.

One thought on “Book Review: Carnival of Chaos”