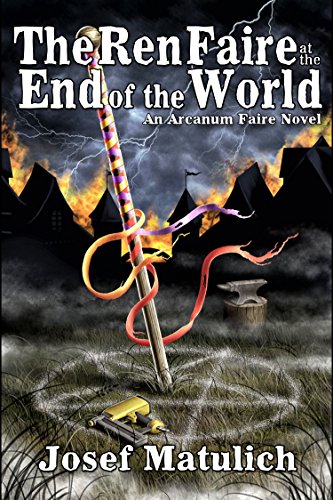 The Ren Faire at the End of the World: The Time of Sex, Magik, and Power Tools is Coming to an End (An Arcanum Faire Novel) 3, by Josef Matulich is a fun tale of the perils of building a Ren Faire in a town of witches and demons. Who knew so much was happening in Arcanum, Ohio?

I was immediately attracted to this book because of the title. It was so long, it had me curious. The start took me a bit to catch on. I was about 2 chapters in before I really understood what was happening. I would suggest reading books one and two first, because I felt I was missing something because this is part three. I think I would have understood it more and had more background on the characters, mostly the bad guy.

The book centers around Marc who is building the Ren Faire and his girlfriend. a witch named Brenwyn. There is an interesting cast of characters helping build and run the Ren Faire. I loved a lot of the side characters, Eleazar is awesome but I did keep wondering if he was from a different time or that this guy really stays in character! I really liked Michael and OCD list guy, they were right up my alley. Some of my favorite scenes were with Marc and his staff because they were funny. I didn’t like the bad guy, but his sister Cassandra, I REALLY didn’t like her., which is the point if you think about it.

I felt the story had a nice flow and it kept my interest. I was engaged and wanted to know the outcome of the story. I was worried about the main characters and really wanted the bad guys to get what was coming to them. If you like a story with witches, zombie farm and wild animals, and demons this is the series for you. The book kept my interest to the end and I have to admit I am a little scared to go to Arcanum, Ohio.

Ariel DaWintre is a writer and voice actor. She has performed in several audio works including “JoJo” in HorrorAddicts.net’s production of GothAmazing Race, “Ember” the novel Dusk’s Warriors, and “Claudette” in the novel Artistic License. She’s currently working on a fish out of water tale about an American living in Hong Kong. She lives in the San Francisco Bay Area.