It’s the mega monster match-up to end all others. Up to six monsters join in one massive fight that will leave the city in ruins. Only one can rule it all. Roll the dice, earn Victory points, and attack your friends to become King of Tokyo.

King of Tokyo is a family game for 2-6 players and takes about a half hour to play. 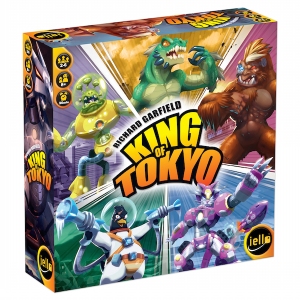 First, choose your monster: Gigazaur, The King, Alienoid, Mekadragon, Cyberbunny, or Kraken (Mekadragon is the best, but you can have your own favorite). Each character has a monster board that tracks the current health and the number of victory points you have earned.

You will want to pay attention to those numbers because there are two ways to win in King of Tokyo:

You gain victory points by rolling matching numbers on the dice, going into or staying inside Tokyo, and through special cards. Attacks from other monsters lower your health and if your health hits zero, you say sayonara and slink back from whence you came.

During play, one monster stands inside Tokyo. While there, every attack they make targets all monsters on the outside. Every attack made by those outside targets them. They can’t heal, but the longer they stay inside, the more victory points they gain. Any time after they are attacked, they can choose to leave Tokyo, throwing their attacker into the city in their place.

King of Tokyo employs dice for the main gameplay. Dice let you attack, heal, earn energy, and gain victory points. Like a game of Monster Yahtzee, you have three rolls to collect what you want and you can reroll as many or as few of the dice as you want.

The game also has bonus cards that you can buy using “energy”. These give your monster extra powers that can boost your gameplay. You earn energy through dice rolls just like everything else, but cards can make all the difference between survival and early death. 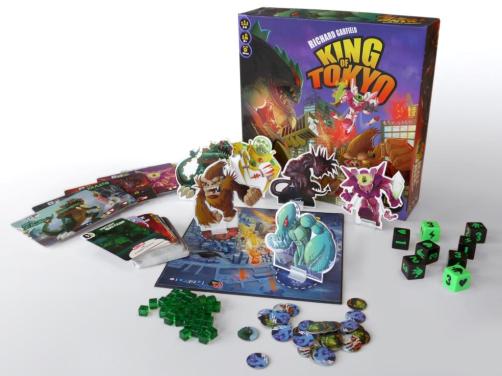 King of Tokyo is a fast, fun game. It’s the best game for casual game players that I’ve reviewed so far. The game involves some strategy, but success is mostly left up to luck. In the many times that I’ve played, I have only seen someone win using victory points once. Generally, the game is a battle for survival rather than a race to the top.

My favorite part of the game is the design. The art has a comic book style that suits the theme and pays homage to countless monster movies. Each of the characters is an off-brand monster (Not quite Godzilla, but you know what they’re going for). Over time, players develop attachments to the various characters, so you’ll probably have your own too.

The only drawback that I have for gameplay is that players who die are out for the rest of the game. While that’s how life works sometimes, it isn’t helpful when you want to keep everyone engaged in play.

Even though there is little actual decision making in the game, it often ends in shouting as players try to convince each other to attack or not, risk it all, and possibly knock themselves out of the game. It’s a good time.

King of Tokyo is easy to learn and the pay off during play is worthwhile. It would be a good game to play when children are around. I recommend it for anyone who loves (or maybe just casually likes) games.

3 thoughts on “Ghastly Games by Daphne Strasert: King of Tokyo”