If any album deserves, by outward appearances, to be labeled cursed, it’s Iron Maiden’s 1982 album The Number of the Beast. The title track was inspired by a nightmare bassist Steve Harris had after watching The Exorcist (1973) and The Omen (1976), and the matching album artwork, was enough to convince the general public that Iron Maiden was a satanic band. The album was subject to much controversy, with public burnings of the records country-wide. Some people even refrained from burning the albums for fear they would inhale the evil from the toxic fumes being released from the cursed vinyl and instead smashed them with hammers. 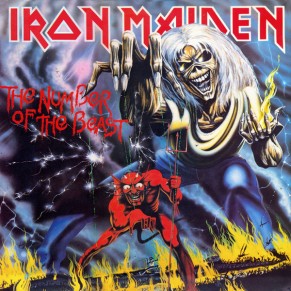 Never mind that the only the title song references the devil and that the lyrics are about a dream of a cult much like in H. P. Lovecraft’s The Call of Cthulhu (1926). The song’s protagonist even says ‘this can’t go on, I must inform the law’, which sounds to me as anti-satanic as you can get. Nevertheless, it was enough to warrant protests from more conservative groups, with leaflets being handed to concert goers outside the venues, and there are even reports of giant crucifixes being carried and erected nearby. And this is just after the album was released.

So it’s not surprising that, given all this controversy, even the guys behind the scenes think there may have been more to the album than meets the ear.

The production was apparently plagued by technical breakdowns and disasters. Most of this involves technical glitches during the recording process, such as electrical faults, and equipment breaking down. It’s amusing to remember that The Exorcist is reported to have had similar issues during its production. Coincidence? Occasionally, I’ve heard, there were one or two moments of coldness in the booths and production rooms during the recording.

But this all pales in comparison to the infamous van-full-of-nuns incident involving the album’s producer, Martin Birch.

The story, so it goes, is that it’s a Sunday, and Birch is driving home from the studio after working on the track The Number of the Beast itself, by a strange coincidence. In the dark and the rain, Birch’s car collides with a van, causing serious damage to Birch’s Range Rover.

Getting out of the car, Birch walks to the van and peers through the windows. To his surprise, he sees half a dozen nuns in the back of the van.

Out of the front comes the driver, shaken up and very lucky to have not been seriously injured, or even killed, in the incident. The man drops to his knees in the middle of the road and begins to pray for a bemused Martin Birch, thanking God for sparing them from further harm.

Perhaps there was some kind of divine intervention there, a tragedy to be inflicted by the beast having been thwarted at the last moment by the worshipers of God. The tale, however, doesn’t end here. A day or two after the incident, Birch takes his Range Rover to the garage to get repairs done. The mechanic eventually comes back with a figure. The total at the bottom of the receipt?

Reportedly Birch asked for the price to be changed, even increased by a few pounds, as long as he didn’t pay that specific number. The album, it seems, had apparently followed him a little too closely.

Cursed productions and media are, of course, nothing new. As well as the aforementioned Exorcist, Shakespeare’s Macbeth is also rumoured to be cursed; witches that lived near Shakespeare’s old home in Stratford having cursed the play after he stole their words for the famous cauldron scenes. And although the curse of Iron Maiden’s album has done nothing to prevent it from being one of the most influential rock and metal albums of all time, it’s definitely interesting to think that, perhaps, they were channeling something a little more sinister than just musical talents and showmanship.

-Article by Kieran Judge for HorrorAddicts.net

One thought on “Odds and DEAD ends: The Number of the Beast, Iron Maiden’s cursed album”