Arkham, Massachusetts: an idyllic New England town complete with mysterious disappearances, mangled bodies, and a suffocating sense of doom that lingers over every home. Strange things have always happened here, but it seems something more malevolent is at work this time. Something that wants to come through…

Arkham Horror: The Card Game hails from the same game universe as Arkham Horror, Elder Sign (previously reviewed for HorrorAddicts.net), and Eldritch Horror. It uses a familiar play style, following a Lovecraftian storyline with the addition of obstacles and monsters drawn at random. Players embody characters who have health and sanity, things they risk in order to investigate and defeat the evil lurking just on the other side of our reality.

Arkham Horror: The Card Game is a narrative game for 1-2 players (expansions allow up to 4 players) and takes 1-2 hours to play. 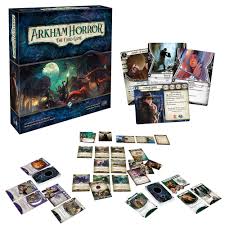 Game play consists of characters exploring their environment (represented by cards) and fighting obstacles that appear there. Finding clues allows the investigators to proceed through the storyline, revealing new locations, items, monsters, and characters. If they advance to the end of the story, they win. But with each round, the horrors advance as well—monsters appear and attack and the situation grows ever grimmer.

Arkham Horror: The Card Game is set up with D&D style campaigns, each containing several scenarios. Characters evolve with experience gained during these scenarios, so as you go further into the campaign, your character has more abilities to help you face challenges that are more difficult. Players can go through an entire campaign at once, or tackle each of the scenarios one at a time. Each scenario takes an hour or two (depending on player experience and the desired difficulty), so if you want to play through an entire campaign, be prepared to stay a while.

Often, I review games for a larger group of people (around 5), so this is a refreshing change of pace. Arkham Horror: The Card Game can be played solo or with a partner. You can combine two core games to be able to play with up to four players. I actually played this one by myself, which was an interesting experience, for sure. The game loses something when you don’t talk strategy with others around you. I would recommend playing with the recommended two players or expanding the game to four.

Arkham Horror: The Card Game is a faster, more compact version of the infamous original Arkham Horror and retains most of those features.

The real draw of Arkham Horror: The Card Game is the Lovecraft aesthetic throughout. The game contains quotes from actual Lovecraft stories, which are just as spine tingling as you would expect. The art has a detective noir theme, albeit with a dark twist (is that blood on the cards?). It’s a gruesome, horrifying good time and is best suited for late nights and dim lights.

As with other narrative style games, replay may become an issue. So much of the play hinges on the story, so once that is played out, replay holds fewer mysteries. There are expansions for Arkham, which helps, and different monsters and difficulty values can make replaying more challenging. However, if you are mainly interested in the story, you may want to try this game out at a board game café first.

I enjoyed Arkham Horror: The Card Game, and I highly recommend it if you are a fan of narrative games. The additional character building elements that allow the game to change with time are a great asset, as well.

I’ve been reviewing an awful lot of Lovecraft themed games, lately. I can’t help it; I love them so much. The dark mythos, the mystery, the monsters… isn’t that every Horror Addict’s dream?