The title of Cannibal Creek, an extreme horror novel by Jon Athan, is the epitome of truth in advertising. 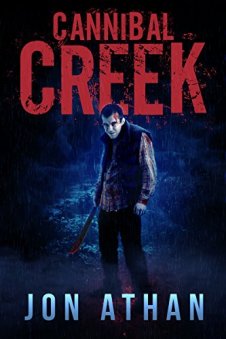 There’s a creek with a community of inbred hillbilly cannibals living nearby in the remote West Virginia woods.

Enter the Bakers and Riveras, two families who arrive in an RV for a family camping trip not far from the creek.

I immediately tallied the numbers: four adults plus three children plus one teenage girl named Jasmine.

That’s potentially eight meals for the price of one book.

Wait a minute. There’s Jasmine’s boyfriend, Joshua, who’s secretly following the family in anticipation of a romantic rendezvous with his girlfriend when the parents are sleeping.

So, a potential ninth meal.

The first third of the book lacks any real action as it introduces the characters, which are typical middle-class Americans. They’re nothing special, but I like reading about ordinary folks facing extraordinary circumstances.

Then, with one shocking scene of unexpected tragedy, Cannibal Creek starts delivering the goods expected in a cannibal story as the surviving characters respond emotionally and instinctively to the unthinkable adversity.

Released August 31, 2017, Cannibal Creek is heavily inspired by classic horror movies, The Hills Have Eyes and The Texas Chainsaw Massacre, so much so the book could’ve been titled The Woods Have Eyes.

But like a solid cover version of a favorite song, Cannibal Creek is respectful of the original material and a worthy addition to the cannibal horror subgenre.