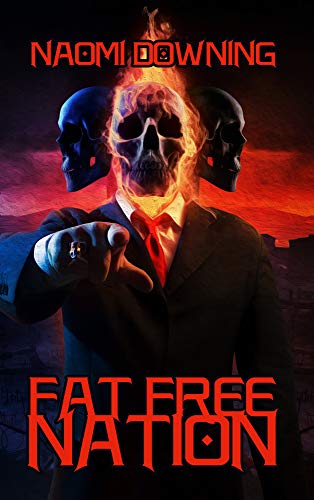 Fat Free Nation by Naomi Downing is a compelling indictment of an out-of-control bureaucracy and the unintended consequences of government meddling. It’s also a damn fine dystopian novel every bit as intense as The Hunger Games.

Downing sets the stage of her dystopian world with a quick introduction:

“The year is 2148 and because of the rise of overweight people, our government created a law that everyone must be within a certain weight range. All junk and fast-food has been outlawed but can still be found in the many black markets. All citizens from the age of eight to twenty-nine who are overweight are sent to government-run weight loss camps. Over the age of thirty and overweight is a death sentence. The camps are split into three age groups. Camp One is for anyone ages eight to twelve, Camp Two is ages thirteen to seventeen, and Camp Three is ages eighteen to twenty-nine. If you age out of a camp and are not within the healthy weight range, in other words you can’t go from one camp to another, you die.”

Fat Free Nation is a fast-paced, dialogue-driven story about Jenna, an overweight 17-year-old who along with her twin brother is on the run from the fat police. From the opening, Downing efficiently establishes the relationship between the likable, feisty, book-loving protagonist Jenna and her protector-brother Will.

By the end of the first chapter, the twins are captured in a raid by authorities, including a sadistic bureaucrat named Major, and transported for orientation into a fat camp where failure results in execution.

Jenna enters fat camp weighing 210 pounds, which is 90 pounds over the government’s limit by law for her age. Jenna and Will have been on the run for 10 years, so adjusting to the highly regimented rules of the camp are tough on their free spirits.

The camp reminded me of an extreme amalgam of prison and Army basic training where the instructors enjoy torturing teenagers. Campers are tagged with trackers on their ankles, forced to write truthfully in journals, and given every opportunity to exercise.

I liked how Downing describes Jenna’s attitude when she arrives at her cabin at fat camp.

“The screen door creaked as Jenna walked in, there was no solid door. There were eight beds, four on each wall. As Jenna walked to the one at the end the smell of sweat and blood filled her nose. The door to the bathroom area was open and inside Jenna could see five toilet stalls, a row of sinks, and an open shower area. At the foot of her bed there was a closed door. Jenna dropped her bag onto the bed, wafting the stale odor of dried piss into her nose.

The fat camp boss Major is as cruel of a villain as I’ve encountered in a story. I winced every time Jenna forgot to address Major as “sir” because the omission usually resulted in physical abuse for the heroine. I wondered how much more punishment Jenna could take.

Major is extremely unhinged psychologically. If he finds contraband, he punishes the teens with ten or more lashes of his whip or 24 hours in a sweat box. Disrespect gets a bullet to the face. Escape attempts result in slit throats. Major revels in intimidating and torturing the campers.

My favorite moment in Fat Free Nation is in Chapter 4 when Jenna understands her desire to survive is stronger than she realizes.

“I don’t want to die, Jenna thought, this world sucks but I want to live.”

That’s as raw and honest of a self-assessment as a character can make.

Major’s right-hand woman is Starling, an assistant who follows the sadistic camp leader’s orders to the letter but doesn’t feel any joy about her job performance. Starling shows a surreptitious sympathy for Jenna.

About a third of the way into the story, a tragedy results in a bombshell revelation followed by another stunning disclosure. I’ll stop here to avoid any spoilers, but the rebellious Jenna’s will is tested time and again.

The only issue I had with Fat Free Nation is the final scene — really the final sentence — because I’ve never been a fan of cliffhangers. With that said, the last sentence is a hell of a moment.

Published by J. Ellington Ashton Press and released August 17, Fat Free Nation is a gritty dystopian novella as well as a powerful metaphor for prejudice and government overreach in our own world today.

Perhaps the most telling moment in Fat Free Nation is a scene where rage and vengeance are about to overtake Jenna, but a voice from the past lends her strength.

“I know you’re hurting and want to hurt them, but you can’t. We need to stay the sane ones in this fucked up world.”

That’s not only a powerful reminder to Jenna, but to everybody as we go forward in the highly charged political and socio-economic atmosphere of the 21st century.