Alex Fernandez’s Dawn is the story of Eva Santiago who was born in a poor village in Peru in 994 A.D. At age 8 she began to learn witchcraft eventually becoming a full fledge witch. But when her family died from a deadly plague Eva vowed that it would never happen to her. It set her feet on a path in search of immortals. After 2 years of searching she found what she was looking for losing her soul and becoming a vampire. For 800 years she was a cold blood hearted killer. Until one day she was offered a chance from GOD by the Archangel Gabriel to become a warrior of GOD. She accepted and took on the moniker of “DAWN’.  That is what makes the Dawn character and series so unique is the fact that she is a vampire who works for GOD. We are currently in the second season. Eva Santiago/Dawn is played by Victoria Amber. 2019 will also see the release of a Dawn short film titled SURGE OF DAWN. A crossover film that brings Dawn into the world of another superhero Surge from the Surge of power films.WE also have comic books based on DAWN. We are currently on the fourth book of Dawn.

2.You won a few awards tell us about them ?

I have been blessed and honored to have won a few awards for not only Dawn but as well some of my other works. It is always nice when you work really hard your craft and get recognized by your peers. But more important than any award is a message from a fan or a letter that says they have been inspired by my shows or that they love it.

My favorite director of all time Alfred Hitchcock happens to also have directed one of the most important horror films of all times PSYCHO. For me without a doubt he was truly not only the master of suspense but also a master filmmaker. Rear Window is still my favorite film of all time. He was a director that was way ahead of his time and a director that will be studied long after we are all gone.

I need film like most people need water. It is something that I not only have passion for but its something that i absolutely love. I don’t think it will go away till the day I leave this world. As long as I am able I will continue to tell stories. My earliest memories of me as a child at 4 years old and me sitting in the theaters watching films. Even to this day I make sure I watch a movie everyday. 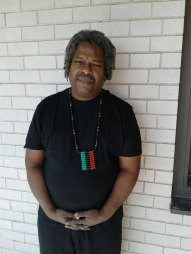 Born and raised in the Bronx, New York James is new to writing speculative fiction. After ten years as an artist representative and paralegal, James decided in 2013 to make a better commitment to writing. Currently writing a series of short Twilight Zone-inspired stories from the world of art (An occult detective short story, The E.E. Just Affair) with the goal of producing compelling stories. His work has appeared in BlackSciencefictionSociety.com, Genesis Winter 2015 Issue, AfroPhantoms.com, Horroraddicts.net, and a non-fiction essay in Apairy Magazine #8 2016 a Metro Philadelphia arts and literature magazine. You can also hear an interview with Mr. Goodridge on Genesis Science Fiction Radio air date 12/2/16 on YouTube.