A First Time for Everything

From the age of eleven onwards, there’s pretty much a steady stream of things you’ll be doing for the first time. In all types of society, the public role of the rite of passage is an important sociological aspect of the transition to adulthood. Yet it still remains the case that most of the more interesting rites of passage involve sneaking around behind your parents’ backs…

Sometimes, the rite of passage occurs in early puberty rather than when we stand on the cusp of adulthood. And they don’t always have to be traumatic. They can be about connecting with your true self. 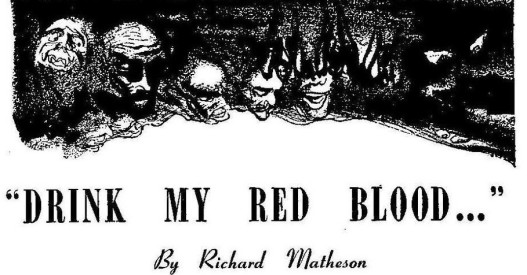 In Richard Matheson’s delightful little short story Blood Son Jules has always been certain that he doesn’t belong. That’s because he has a strong personal certainty that he fits in somewhere else entirely. His difficulties are that his parents and schoolteacher just can’t understand. Sound familiar? Well to many of us it probably is but Jules is a plucky little lad and as time moves on he just becomes more determined to find a path to those he can call his own. Good for him!

“One Saturday when he was twelve, Jules went to the movies. He saw Dracula.

When the show was over he walked, a throbbing nerve mass, through the little girl- and -boy ranks. He went home and locked himself in the bathroom for two hours.

His parents pounded on the door and threatened but he wouldn’t come out.

Finally, he unlocked the door and sat down at the supper table. He had a badge on his thumb and a satisfied look on his face.”

It takes a few more years until Jules finds a bat at the zoo and begins to see a way through to making the identity he longs for, and strongly associates with, reality. In Jules’s case his rite of passage is the time-honoured first bite.

The onset of puberty involves first times for girls too. In Stephen King’s novel Carrie, Carrie White doesn’t get a visit from the curse until she’s sixteen. That’s very late and theories abound as to why puberty was delayed so long. What could there be in her upbringing to explain her physical rejection of womanhood? It’s right there in the form of her appalling mother, of course. As soon as Carrie realises that she isn’t bleeding to death after all her first thought is one of anger at everything and everyone who has singled her out and made her different. In Carrie’s case her primary defence mechanism to deal with the pain of her mother’s behaviour is to embrace the darkness:

“She thought of imps and familiars and witches (am i a witch momma the devil’s whore) riding through the night, souring milk, overturning butter churns, blighting crops while They huddled inside their houses with hex signs on Their doors.”

Carrie White is a master class in how anger can spill over when an individual is rejected not just by their mother but then by society as a whole. It’s no surprise that the ensuing prom night doesn’t end well.

The real danger lurks for society whenever the emerging adult is denied a sense of belonging to the tribe and that this lies beneath the importance we attach to rites of passage ceremonies.

In some cases, the choice to belong or not (the fundamental ability to fit in) isn’t ours to make. Sometimes, an uneventful transition to college and the adulthood that lies beyond just isn’t meant to be. In Stephen King’s novel Christine, Arnie Cunningham and his best buddy Dennis are working their way through high school. All’s right in their world: Dennis is a football star set for college. Arnie is keen on mechanics and hopes to persuade his university-lecturer parents to let him skip college and do something vocational instead. Both Arnie and Dennis have part-time jobs that pay well and are saving hard for the usual things – college and a first car. It’s all going so well until they drive past a broken-down 1958 Plymouth Fury with a For Sale sign. From the outset the car seems to cast something like a lovespell on Arnie, as Dennis is well aware:

“I thought about LeBay saying, Her name is Christine. And somehow, Arnie had picked up on that. When we were little kids we had scooters and then bikes, and I named mine but Arnie never named his – he said names were for dogs and cats and guppies. But that was then and this was now. Now he was calling that Plymouth Christine, and what was somehow worse it was always ‘her’ and ‘she’ instead of ‘it’.”

Dennis’s share of the tale is shot through with the pain of watching his best friend’s life implode. Central to that is watching the subversion of many ‘first time’ rites of passage by the dark force that is Christine: buying your first car and doing it up, asking a girl out, taking things all the way. Stuff that Dennis is still able to enjoy but from which Christine is able to exclude Arnie.

It is natural, bearing in mind the importance of getting rites of passage right, that we are afraid of being unable to take charge of our own transition to adulthood. Isn’t that what growing up is all about, after all?

Rituals appear in all forms of society and feature in human lives for thousands of years. The details may differ but the purpose remains the same at every point in history. Ignore them at your peril!

John C Adams is a Contributing Editor for the Aeon Award and Albedo One Magazine, and a Reviewer with Schlock! Webzine.

You can read John’s short fiction in anthologies from Horrified Press, Lycan Valley Press and many others. A non-binary gendered writer, John has also had fiction published in The Horror Zine, Devolution Z magazine and many other smaller magazines.

John’s fantasy novel Aspatria is available to read for free on Smashwords, and on Amazon. John’s futuristic horror novel ‘Souls for the Master’ also is available on Amazon.

John lives in rural Northumberland, UK, and is a non-practising solicitor.