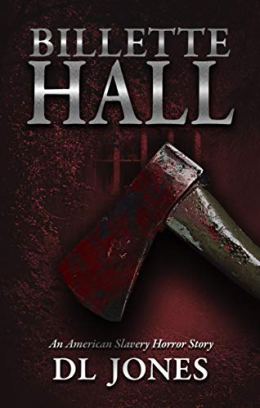 In Billette Hall, DL Jones spins a unique story of love, betrayal, and terror against the backdrop of slavery in the Deep South.

The slaves of Mason Creek face an uncertain future when they find that the plantation owner plans to sell them at auction. Relationships forged through years of hardship strain under the possibility of being torn apart. When their fear of separation comes to fruition, the group escapes under the cover of nightfall with the help of an escaped slave, Marion, who plans to take them to Billette Hall and reunite them with their loved ones. On the way, they must elude dogs, slave catchers, and a mysterious mud-covered murderer who uses his axes to leave a bloody trail of horror.

Billette Hall tells a horror story inside a horror story, exploring the atrocities of slavery with the added heart-stopping action of a murder thriller. Slavers wield whips and chains. Slave catchers wait in the trees with their dogs and guns. The Mud Covered Man stalks the characters through their journey, waiting behind every page to plunge us back into terror.

Jones spares no gore when detailing the gruesome attacks. The story contains historically accurate details that bring it to life. The characters have meaningful relationships with each other that drive their behavior and ultimately their fate. Characters have deep reactions to the situation around them, tempered by the fear that punctuates the story. Billette Hall is soaked with death and no character, no matter how beloved, is safe from the rampage.

Those interested in the slavery era in the United States will appreciate this underrepresented premise in the horror genre. Billette Hall contains plenty of twists and turns for horror addicts. I promise you’ve never read a book quite like this.

One thought on “Book Review: Billette Hall by DL Jones”