Book Review: Revenge of the Vampir King by Nancy Kilpatrick 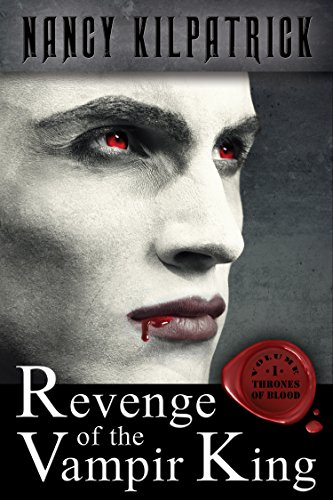 In Revenge of the Vampir King, Nancy Kilpatrick blends horror, paranormal fantasy, and erotica to explore the relationship between love, tragedy, revenge, and what it means to be a family.

Through the centuries, an immortal war has raged between the Sapiens and Vampirii. The world is bitterly divided between the two races.

After a successful attack against the Sapiens, the Vampirii return with an unusual prize: Valada, the daughter of the Sapiens King.

Hell-bent on the ultimate revenge, the Vampir King Maorte devises a hellish plan of manipulation—make the princess fall in love with him and betray her father—never suspecting that he will fall into is own trap.

As dark secrets are uncovered, new alliances are formed. Valada and Moarte must learn to trust each other in order to settle old scores, bring about lasting peace, and save their kingdoms and, perhaps, themselves.

The plot is gripping, seamlessly pulling the reader along on a tense journey. The pacing is excellent, with no time to become bored. There are plenty of twists and turns, with shifting allegiances. One thing is for certain, you never know exactly what will happen next. Each new conflict feels enormous, raising the stakes ever higher.

The characters are complex. Each has a multitude of motivations. Flaws and strengths motivate each and motivations are clear and realistic. This gives the book a sense of real-world conflict. Characters aren’t evil for evil’s sake (though some are undeniably evil).

Valada, who has suffered under a lifetime of abuse, struggles to orient herself in her new position, constantly doubting her place with others, but never herself. She’s a strong heroine and saves Moarte every bit as much as he saves her.

Moarte is a man of two worlds. Though he leads the Vampirii, he is half Sapien as well. Reconciling those differences may bring him to conclusions that have profound ramifications for his life and his kingdom.

Kilpatrick forges an ambitious, unique world, fearlessly diving into fantasy world building without looking back. Revenge of the Vampir King is all the better for it. We are thrown right into the world, rather than given a hesitant introduction. The universe is immersive from the start. There is clearly a rich history, leaving plenty to discover throughout the plot and in future installments to come.

Kilpatrick’s writing flows well. There are moments of profound description and lovely prose, particularly with regards to the romance. She accomplishes the difficult feat of getting out of the way of the story itself and leaving the reader to be sucked in, as if they aren’t reading at all.

Filled with dark themes, Revenge of the Vampir King challenges the standards of romance, pushing the limits of love with blood and betrayal. If you’re looking for a book that you can’t put down, this is a sure bet.

5 thoughts on “Book Review: Revenge of the Vampir King by Nancy Kilpatrick”