Jonathan Fortin was named the Next Great Horror Writer by HorrorAddicts.net and is a graduate of the Clarion Writing Program. His novel Lilitu: The Memoirs of a Succubus is a

1) How old were you when you first discovered horror?

I remember getting into horror as early as first grade when I started reading the Goosebumps books. Then in middle school, I became obsessed with Tim Burton’s Sleepy Hollow and wrote a trilogy of short vampire novels. However, I was an anxious, easily-terrified child, so I didn’t fully embrace horror until later in life. Now, I’d always been drawn into darkly magical worlds, even in the video games I adored (American McGee’s Alice, Planescape: Torment, Vampire the Masquerade, etc.) But because I was so sensitive, it was rare for me to watch horror movies in my youth. That changed when I went to college, and began trying to face my fears and challenge my limits. I realized then that I’d been a horror fan all along–I had just been too scared to accept it.

2) Who is your favorite author? Who has influenced you?

3) What inspired you to write your piece?

“Consumption” is about the anxiety of losing your identity in a homogenized office culture. For my day job, I work in a call center. Environments like that make it difficult for people to be authentically themselves, as you can easily be judged by coworkers if they learn that you’re different from them in some way. For work to run smoothly, you must conform to a larger whole–losing your identity in the process. I’ve always been highly individualistic, and struggle to conform to social expectations, so I’ve never liked the idea of being consumed into something larger than myself. I didn’t get to explore this theme as deeply as I wanted because of the length requirements, but that was the fear that drove me to write this story.

4) How much control do you exert over your characters? Do they have free will?

Generally, I develop characters so that their behavior will naturally drive them into the stories that I want to tell, but I love it when they surprise me by doing things I don’t expect or react to each other in ways I never planned. In the past I’ve tried to force characters to act in ways that didn’t feel authentic to me, but as any writer will tell you, that just doesn’t work. So in my experience, characters NEED free will if you want the story to feel real. That doesn’t mean I won’t carefully manipulate the world around them, though.

5) What did you learn from participating in the contest?

You never know whether you’re really all that into a story idea until you try to write the damn thing.

Since I won, I don’t really see the point in doing it again. I’m too busy trying to live up to the title, haha. But if I were to do it again, I would try harder to strengthen my nonfiction submissions (articles, interviews, etc.). 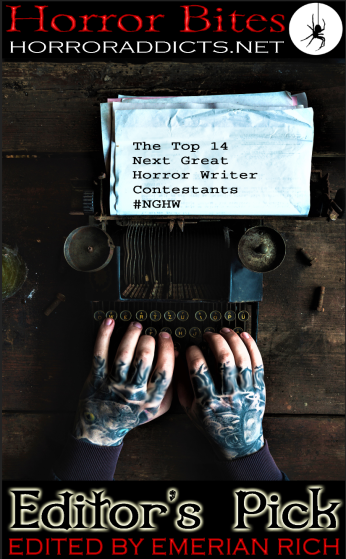 7) What is your favorite horror novel?

Hard to choose, but a few that have stuck with me are Joe Hill’s NOS4A2, Neil Gaiman’s The Ocean at the End of the Lane, Caitlin R. Kiernan’s Silk, and Dan Simmons’ Drood. If I could include graphic novels, Black Hole by Charles Burns and Providence by Alan Moore would also be serious contenders.

Crimson Peak, Oldboy, The Thing (1982), and Vampire Hunter D: Bloodlust, among many others.

There seems to be a pattern of four here, so I’ll say Carnivale, Hannibal, Penny Dreadful, and Stranger Things.

10) What does the future hold for you? What do we have to look forward to?

At some point, my novel Lilitu: The Memoirs of a Succubus will be released from Crystal Lake Publishing. HorrorAddicts is also putting out my short story Requiem in Frost, from the contest’s musical challenge. I’m working on a few other novel projects right now, and have a completed (if rough) first draft of one that I’m very excited about. My hope is to complete a polished, publishable draft of my second novel and then find an agent for it.