Sumiko Saulson is a cartoonist, horror writer, editor of Black Magic Women – on the 2019 Stoker’s Recommended Reads List – and 100 Black Women in Horror Fiction. Author of

1) How old were you when you first discovered horror?

My parents were both big horror fans, and I was watching horror movies in the theater when I was 4 or 5 years old. My mom told me dad took her to see Rosemary’s Baby when she was pregnant with me, but of course, I don’t remember that. I do remember watching Dark Shadows with Mom, Outer Limits and Twilight Zone with Dad, and going to see It’s Alive, the first horror movie I actually remember, when I was about 5 years old. It was about a horrible monster baby who ate people. I loved it! The first horror novel I read was Peter Straub’s Ghost Story when I was 11. I was also reading a lot of horror shorts among the sci-fi shorts in Asimov’s Science Fiction.

2) Who is your favorite author? Who has influenced you?

My favorite writer changes a lot and at the moment it is Toni Morrison, who isn’t even a horror writer but is one of my most-read writers nonetheless. My influences are all pretty mainstream. I picked up The Talisman when I was 12 and added Stephen King to my favorite writer’s list along with Edgar Allen Poe. Toni Morrison, Alice Walker, Anne Rice, Dean Koontz, Christopher Rice, Susan Cooper, Frank Herbert. I have ingested so many books by a few favorites that I am sure my writing style has been affected. I am also a huge fan of anthologies and sci-fi, horror, and fantasy magazines where you can gain exposure to lots of different writers in small tastes, and see who you like. I read a lot of Weird Sisters and other horror tale magazines as a teen. Those affected me. Mythologies have affected me a lot. I read a lot of Greek, Roman and Norse mythology as a kid, and as an adult, I casually read both historical mythologies and created mythologies. I should have listed CS Lewis because the created mythology in Chronicles of Narnia impacted me heavily as an adolescent.

3) What inspired you to write your piece?

The song’s title “Under the Water” is from the song of that name by the artist Jewel from the movie The Craft. The story I wrote is about a ship that is being seduced by a giant cephalopod (squid or octopus) type sea monster such as a Kracken who wants her to become a ghost ship. Both the ship and the monster are female. Pirates of the Caribbean: Dead Man’s Chest was definitely an inspiration, as were Greek and Roman myths about sea monsters such as the Kraken and the Charybdis – a monster whose mouth created whirlpools to drag ships to the bottom of the ocean. The ship would have to sacrifice her human cargo to the monster, so they would become part of a ghost ship. As the ship is dragged deeper into the depths by the cephalopod, she begins to doubt the sincerity of the sea creature because she sees lots of dead seamen from the past and torn up ships. Then, the monster starts talking to her like Armand in The Theater of Vampires did to the woman he drained on stage, about how even if she’s being lied to it would be a glorious noble death so she wins either way. That part of the story was inspired by my former fiance’s battle with drugs, which ultimately ended his life, not long after. I had written a lot of sea stories the year prior about the drowning man sort of feeling being dragged down into the depths of addiction gives one. So this is sort of an allegory. Drugs are seductive and so is the sea creature.

4) How much control do you exert over your characters? Do they have free will?

5) What did you learn from participating in the contest?

I do my best work short story when I have more time than was allotted during the contest. I have great story ideas, but my ability to follow through and edit them on such tight deadlines is severely inhibited. I’m good at taking, absorbing, and responding to criticism but I dislike it. I am very absent-minded, probably due to having post-traumatic stress disorder. Greg – my ex-fiance – overdosed May 26, 2017, and I could have pulled out of the contest, but I didn’t. I didn’t want to. I am a very determined person. I found out I am tougher than I think I am. I found out I CAN work on those tight deadlines, even if it isn’t my forte. And sixth place out of hundreds who applied and I think 15 or so who competed is not too bad. I also learned that it is really important to have clever story titles. And that I need someone else to proofread my work before I send it in.

I don’t regret doing it so I absolutely would. I regret not asking for help after Greg died. I literally sent in the wrong manuscript, and I lost 10 points for not reaching the right word count and dropped from 4th place to 9th place overnight because I made a mistake and sent in the wrong file. It makes me want to cry when I think about it to this day. I had a version of the story that was completed, and I could have sent it in and I definitely would have placed higher – maybe 4th place, if I hadn’t slipped up. I can’t prevent people from dying, but I can ask for support when I need it from my family and friends. On the bright side, I did get the story accepted for Loren Rhoads’ charity anthology, Tales from the Campfire. She said it was her favorite one in the whole anthology! Of course, I edited it twice – once for an anthology Dan Shaurette was working on called Not Today  – he rejected it – and then for a Mary Shelley work honoring anthology of some kind that rejected it. Getting rejected and doing re-writes seems to be a part of the business. And I finally took the judges’ advice and changed the damned story title! It was called Experiment IV, it is now called Unheard Music from the Dank Underground. The advice about avoiding dull story titles was some of the most memorable from the contest. I would say it was an educational experience and that I notice the people who were in the top five are all popping up all over the place and quickly moving ahead in their careers so I think it’s educational, and good experience and people should go for it! 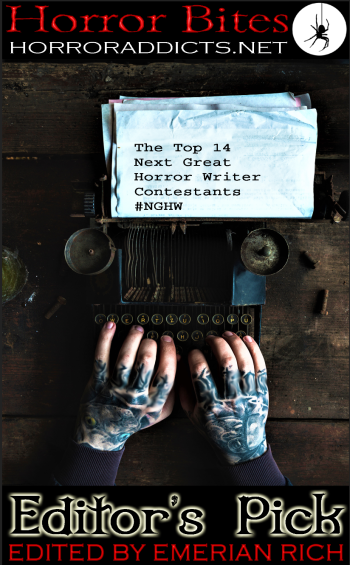 7) What is your favorite horror novel?

The Vines by Christopher Rice

10) What does the future hold for you? What do we have to look forward to?

As you may know, I am the only black author who completed the contest, and even though I made it in sixth, not first place, that alone makes me a winner just because I decided to stick it out and to represent. I totally hate it when I am watching Face/Off or some other horror related contest and the black guy gets voted off in the first or third episode, so I was very determined to stick it out.

I got a lot of interest from black anthologies and people who are interested in horror authors of African heritage. I got three stories in Scierogenous II which is edited by Valjeanne Jeffers and Quinton Neal. I also edited Black Magic Women, a horror anthology on Mocha Memoirs Press. It ended up being on the Bram Stoker’s Recommended Reads list in 2018 and did quite well critically and in terms of sales. I edited Crystal Connor’s YA horror story My 1st Nightmare. I am editing my second anthology, Wickedly Abled, a collection of stories horror, dark fantasy and dark sci-fi by and about disabled people. I am working on Akmani, the fourth book in the Happiness and Other Diseases series and Disillusionment, the second in the Solitude series. I am starting to appear at conventions nationally and not just locally. I’m still churning out short stories and getting into more and more anthologies.