Chantal Boudreau is a speculative fiction writer from Sambro, Nova Scotia with a focus in horror and fantasy. She has published in Canada in the anthologies Tesseracts 20, Dead

North, Clockwork Canada, and Chillers from the Rock, amongst others.  Outside of Canada, she has published more than fifty stories.

1.) How old were you when you first discovered horror?

I was aware of horror from a young age.  I always enjoyed scary stories as a child, and I remember watching Tales of the Unexpected and reading horror comics when I was still in elementary school.  I started reading my sister’s horror novels as a pre-teen, which is also when I got to first see the original Dawn of the Dead.  I was hooked from then on.

2.) What author has influenced you most?

I can’t say it was one author.  When it comes to horror it would be a mixture of Tanith Lee, Stephen King, and Fredric Brown, primarily, but there were many other influences.

3.) What inspired you to write your piece, “Strange Music?”

Waiting for the bus one day, I heard a familiar birdsong that was just a little “off.”  My imagination grabbed the moment and ran with it.

4.) How much control do you exert over your characters? Do they have free will?

I start off giving them traits and thoughts, directing them into the plot, but after a certain point they develop to a point of realism where they start doing their own thing.

6.) Where do you find inspiration?

Everywhere-things friends or family say, experiences from my past, my own worries and fears, something I see or hear that happens to spark my imagination.

7.) What is your favorite horror novel?

I’d have to say Stephen King’s It. 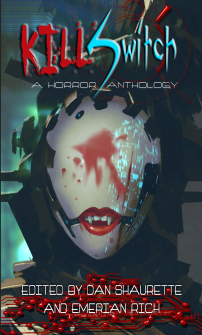 That one’s harder.  I love the classics, like George Romero’s zombie movies, and modern horror like Get Out but I’d have to say the one I found the most visceral and sensory was Perfume.

I was a fan of Z Nation, despite its camp, and sad that it was canceled.  I’d say my favourite right now is Santa Clarita Diet-it is quirky, gross and fun.

10.) What does the future hold for you? What do we have to look forward to?

I’ll just look into my crystal ball…seriously, I have no clue.  I keep putting something out there and hoping things will stick.  I’ll keep writing and I’ll keep dreaming.