Welcome to the town of Arkham where the year is 1926. Something sinister lurks in the shadows behind the speakeasies. Monsters have been popping up all over town and something ancient and evil is waiting to break through to our world. Only a handful of investigators stand in the way. They must risk their sanity and their lives to keep Arkham from falling into devastation.

Arkham Horror: Call of Cthulhu is a cooperative board game for 1-8 players and takes 2-4 hours to play. It’s extremely complex and is recommended that all players be 12+.

The game begins with all players choosing a character. These characters come with skills and items that will help them to defeat the horrors that pop up throughout the game.

Each round, the characters move around Arkham, collecting items and clues to help them win. Beware, though, the monsters are also moving and each round brings the Ancient One closer to breaking through the barriers into our world. Characters must defeat the smaller monsters or risk being killed. This is accomplished by rolling dice—the number of dice depending on the character’s abilities and the strength of the monster.

As play progresses, portals to other dimensions open throughout the town of Arkham, allowing monsters to enter and wreak havoc. Players must go through these portals and survive the horrors on the other side in order to close them. If the players close enough portals before the Ancient One crosses into Arkham, they win. If not, they must defeat this monstrous abomination and somehow survive the process. 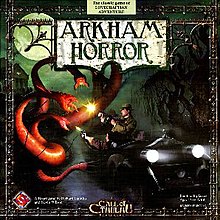 Holy hellspawn, this game is complicated. We spent almost as long reading the rules as we did playing for the first time.

The overall concept is straightforward: kill monsters and close portals before the Ancient One comes through. But how you do that is subject to hundreds of rules and strategies. Once you understand those, however, the game is fast paced and fun. Strategizing with your fellow players forms the main playtime of the game. The game isn’t pure strategy, as the players are subject to the randomness of die rolls and card draws.

The game pieces are well made and admiring the artistry of the cards is valuable all on its own. There are a lot of pieces to track, so be organized.

Arkham is a game with high replay value, making it well worth purchasing. Make sure you have others who are invested in playing as well, because complicated games aren’t for everyone. Take the time to read the rules thoroughly before you play and designate someone as the rule keeper so you can ask questions as they arise (and, boy, do they arise!).

For a faster, simpler version of Arkham Horror, look for Arkham Horror: The Card Game (which I previously reviewed). There is also an updated version, that I have not yet played.

I loved Arkham Horror. I’ve been wanting to play for a while and finally got the opportunity. I was hooked twenty minutes into play time. I’ll be buying this one for myself.

One thought on “Ghastly Games with Daphne Strasert: Arkham Horror | Call of Cthulhu”