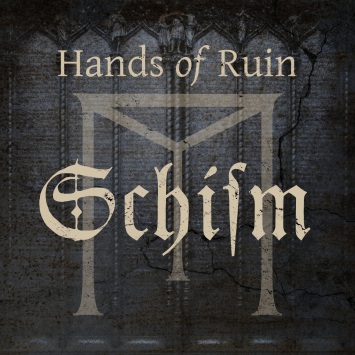 Album/Song/Tour we are excited about right now.

Schism was released in 2017 and had been written over the previous five years, and was the result of trying to push myself to create something harsher and darker than I otherwise would.

What singers or bands inspired you growing up?

Autechre and Aphex Twin inspired me to make electronic music, and then discovering the Cold Meat Industry artists such as In Slaughter Natives, Arcana, Raison d’être and Desiderii Marginis inspired me to work on dark ambient and martial industrial music.

Who are your favorite artists today?

These days I listen to a lot of the same music I listened to when I was young, but also Triarii, Wappenbund, Of the Wand and the Moon, Wardruna, as well as more danceable industrial music such as Front Line Assembly and Haujobb.

What non-musical things inspire your music?

I’m fascinated by all sorts of non-musical sounds. Listening to engines and machinery, or natural sounds, and thinking about the processes that produced them, often gives me musical ideas. Beyond that, music for me is a way of talking about feelings that I don’t have the words to describe, or am too afraid to put into words.

Is there a place where you go to be inspired?

There’s something contemplative and slightly melancholic about watching the landscape go past on train journeys that I find often gets me thinking about how I’d write some music.

What’s been the greatest achievement of your band?

I was very proud to have remixed two of Jo Quail’s tracks. She’s a superb musician and both tracks are beautiful pieces of music, so it was an honour to do that and see them released: https://joquail.bandcamp.com/album/hands-of-ruin-remixes-2

Where was the coolest place to play? Where did you enjoy yourselves the most?

I rarely play live, but I played at an art gallery in under some Victorian railway arches some years ago, so I was playing in a dungeon-like environment – all old brick, dust and cobwebs. It felt like the perfect setting for my music.

What are your favorite horror movies?

Nightbreed, The Company of Wolves, Alien, The Cabinet of Dr Caligari, The Fly

If you could play anywhere in the world, where would it be and who would be your opening band?

Playing live is not something that I particularly aspire to. I’m very content to make music in my bedroom. I’m not a performer. But if I were to play live then I’d want to turn the question around: who would I like to open for? It would be an honour to open for In Slaughter Natives, for example.

What are you working on now for future release?

I’m writing a soundtrack for Murnau’s Nosferatu. It’s still early days, but I’d certainly like to have it done in time for the film’s hundredth anniversary in 2022.

Anything you want to tell the listeners?

Thanks for taking the time to listen!