Los Angeles, CA (Wednesday, July 10th, 2019): Genre distributor TERROR FILMS is pulling out all the stops ahead of the official premiere of Hell House LLC III: Lake of Fire, which will debut exclusively on SHUDDER this fall.

For the third and final installment of Stephen Cognetti’s Hell House LLC franchise, they are releasing the official poster for Hell House LLC III: Lake of Fire as both a jpeg and an animated version – with movement and sound!
Terror Films’ President Joe Dain has talked about the cast of Hell House LLC III, recently. Dain said: “first we announced that most of the original cast was coming back for the third installment. We’ve hinted at the development of The Abaddon Tapes, a limited series that would explore the origins of the hotel’s evil history. We announced the one-day theatrical event for the original Hell House LLC and now we’re dropping this badass animated poster for HELL HOUSE LLC III: Lake of Fire. The fans deserve all of this and much more for helping us make this franchise such a huge hit.” Both posters are available now!

A release date for the third and final installment will be announced soon. The official trailer drops in the coming weeks, along with a few sneak peek clips.  The official poster is below but if you’re having trouble finding or viewing the animated version you can check it out on both the TERROR FILMS and HELL HOUSE LLC official Facebook pages. 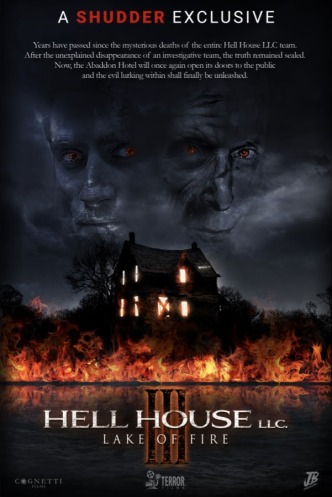 ABOUT SHUDDER: AMC Networks’ Shudder is a premium streaming video service, super-serving members with the best selection in genre entertainment, covering horror, thrillers and the supernatural. Shudder’s expanding library of film, TV series, and originals are available on most streaming devices in: the US, Canada, the UK, Ireland and Germany. To experience Shudder commitment-free for 7 days, visit ​www.shudder.com​.

ABOUT TERROR FILMS: TERROR FILMS is a genre distribution company specializing in the release of the best indie horror films across the globe with content available on over 20 platforms across 50 countries. To learn more, visit www.terrorfilms.com.