I have previously reviewed Thrones of Blood #1 and #2 for HorrorAddicts.net. I wouldn’t recommend jumping into the series at this point without reading the previous volumes.

Continuing in the line of Revenge of the Vampir King and Sacrifice of the Hybrid Princess, Abduction of Two Rulers delivers more of Kilpatrick’s unique world.

Abduction of Two Rulers is a paranormal erotica with dark themes. 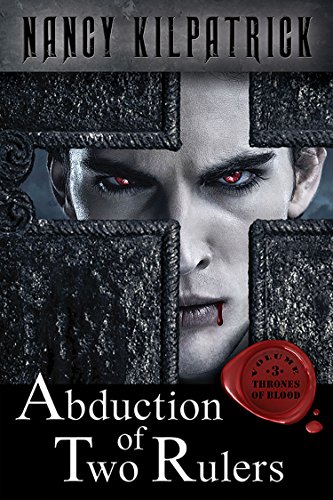 After a failed conference to discuss peace between the Vampir and Sapien kingdoms, Vampir King Thanatos and Sapien Queen Blanka find themselves captured by rival forces who are looking to solidify power.

Blanka and Thanatos must escape their captors if they are to keep their kingdoms from plunging into war and falling into the hands of the vicious vampir Queen Lamia.

But escape requires sacrifice and changes both their lives forever. Thanatos and Blanks forge a bond out of mutual suffering and respect. They must use that new bond to save themselves and possibly their two worlds.

Abduction of Two Rulers never lets up on the action. Every sequence leads into another with higher stakes. We are taken deeper into the world of the Vampirii, finding more kingdoms and scarier threats.

Blanka is a level-headed queen. She thinks of the good of her people first. She has a kind heart and wishes to understand others. She is what the Sapien world needs in order to make peace with the Vampirii. The betrayal that leads to her captures turns her world upside down and she needs to rethink the assumptions that made her such a positive ruler.

Thanatos has been dead inside for a very long time. At least, he thinks that he has. He’s a practical and cynical vampir. But Blanka has a light about her that reminds him why he loved life in the first place. She pulls him back from a bleak world.

Queen Lamia quickly becomes the most terrifying and sadistic villain in the series so far.

The world of Thrones of Blood is becoming more intricate with each book in the series. There is clearly more history to be revealed. Each not fragment of information builds a stronger connection with the reader, luring them in to want more.

Kilpatrick, as always, has excellent description. She delves deeper into the visuals of the world in Abduction of Two Rulers. She continues to weave together the stories of the characters that we’ve met so far, creating an intricate series that builds rather than handing off each book with a happy ending. The stakes continue to rise and we can be sure that we will see more of the previous characters in books to come.

Abduction of Two Rulers is my favorite of the Thrones of Blood series so far. The characters are dynamic and driven. The setting is complex and fascinating. If you like dark erotica, consider this series.